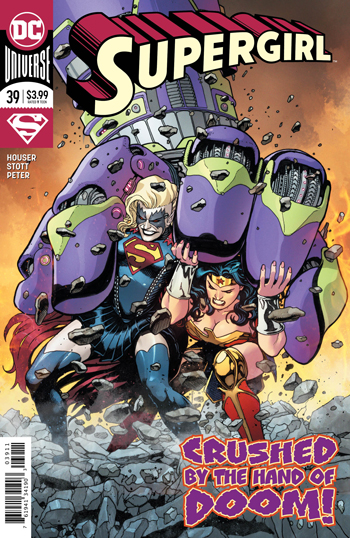 Writer Jody Houser and artist Rachael Stott have done a great job of refocusing this book and giving us something new. The book has became a lot more interesting and a lot more enjoyable. This issue is pretty cool, too, and really advances the story that this creative team is telling.

The opening of the book takes place in Washington D.C. We get to see a bunch of mysterious government people in a conference room talking about Supergirl and her new state of being.

The scene basically talks about how Supergirl may be a threat and that if the heroes don’t take care of her, the government will have to. Things aren’t looking too good for Kara.

We then get to see the possessed Supergirl fighting Wonder Woman.

Wonder Woman has her tied up with her Lasso of Truth. But just as Wonder Woman thinks she has her, Kara breaks free! The two of them tussle! Then, some strange beings appear in the sky and shoot a beam of Kryptonite at Kara!

Wonder Woman then helps Kara fight these evil creatures! The battles get really intense! This is where Stott really excels. The artwork is clean and the action is incredibly exciting!

This all leads to the last page of the issue.

It is incredibly chilling what happens. It is starting to look like Kara has lost all of her humanity. I am looking forward to seeing what happens from here. This is pretty damn exciting.