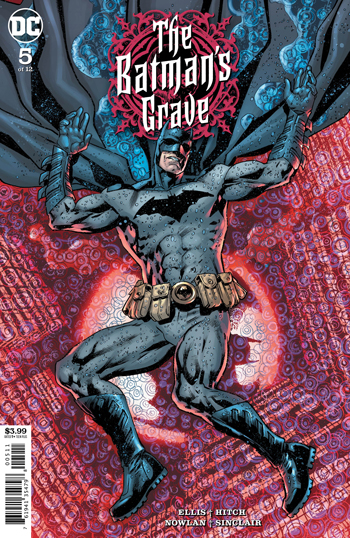 Warren Ellis and Bryan Hitch have produced a fantastic example of what differentiates Batman from all other superheroes.

It’s not just the stark reminder that he’s the world’s greatest detective but also the subtleties throughout. Commissioner Gordon opens the show with a phone call praising his fellow officers for their work and offers to make the morning coffee run.

A coffee run is a common social practice in police precincts, which brings a little authenticity to the story. It also paints Gordon in a positive light since he’s a high-ranking office doing something nice for his subordinates.

Batman meets Gordon at Arkham Asylum to question a person of interest in their investigation. This is where the artwork of Bryan Hitch begins to shine.

Batman entered the Asylum and was met by a cavalier Warden Arkham, who’s accompanied by two orderlies who looked like inmates.

The long, overstretched hallway with a grand staircase, looked suspicions despite its typical aesthetic. Once Batman and Gordon began to question their suspect, absolute chaos ensued. Hitch did a phenomenal job of depicting an intense battle scene while exhibiting high tension with each turn of the page. Crazed facial reactions, intricate and bloody attacks make great use of page space. Batman jamming a Batarang into the exposed cut of his assailant looked brutal, and the pain it caused viewed even worse.

Ellis increased the tension at this moment even more.

During all the crazy, Batman knocked a gun out of Gordon’s hand to prevent him from killing someone. The potential narrative implications were highly engaging for a variety of reasons. Batman is known for his no-kill rule; however, Gordon was doing his job. Batman has a tech suit, gadgets, and superior fighting skills. Gordon doesn’t, and now Batman had to save himself and Gordon. Alex Sinclair’s color pallet augments Hitch’s illustrations to great satisfaction. Muted reds and dirty grays set the appropriate tone.

The book concluded with a reveal that ups the stakes of the overall narrative.

Conspiracy is the word of the day. On top of the superb storytelling by Warren Ellis, he always finds a way to have the title of the series loom over everything that occurs. Between the warnings of Alfred, Gordon, and now, Warden Arkham, people are concerned about the finality of Batman in some form.

Even though we know Batman isn’t going to die, that doesn’t stop Ellis from trying to convince the reader that it could happen, which is ultimately the book’s greatest strength. Despite no rogue’s gallery or bombastic plot points, the craftsmanship of Ellis, Hitch, and Sinclair makes this series the best Batman book you will find on the shelf.