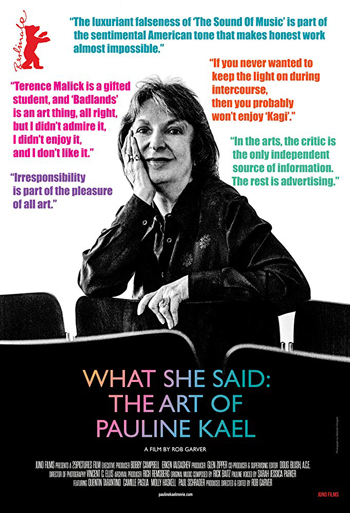 I don’t remember the exact incident that sparked my interest in film critic Pauline Kael.

I vividly recall my mom suggesting I watch a show called “Sneak Previews” on PBS, thus cementing my watching Siskel and Ebert religiously every week.

I also recall my mom buying me my first Leonard Maltin Movie Guide; I would buy every subsequent edition for years.

As for my Pauline Kael “moment”, I can’t place one. I know that it dovetailed with my emerging obsession with DePalma, of whom Kael was a huge admirer.

I began checking out the book collections of her reviews, with evocative titles such as “I Lost it At the Movies”, “Kiss Kiss Bang Bang” and “Taking it All In”.

I practically inhaled her reviews, and began reading about her life, her feuds with fellow film critics Andrew Sarris and Molly Haskell, her seduction into Hollywood production by Warren Beatty and more.

These events and much more are covered in the new doc about Kael, which is full of wonderful anecdotes and insights into her life and work.

There is much here I was aware of, but there are many things that I found fascinating, such as the consensus that she was a lousy playwright, and that Quentin Tarantino was so enamored of her description of Godard’s Band of Outsiders that he exclaimed that it described his aesthetic.

The film also does a fine job of relating the sexism she faced in her career. She felt that most men honestly believed that women who created art were charming and attractive, but women who critiqued art were less gifted at doing so than men.

We are told of her controversial views on certain films, such as her hatred of The Sound of Music an Lawrence of Arabia, but also her unwavering support for films that were initially derided by many, most importantly, Bonnie and Clyde.

We also get a taste of a very unflattering side to Pauline, revealed during a critics’ celebration of David Lean. Lean was invited to the event; he was honored by this and was led to believe it was a night during which he would be feted.

Pauline’s actions that night scarred Lean and actually gave him pause, genuinely reconsidering his talent. It was a crappy and petty action on her part, whatever feelings she held toward the director (shades of Armond White publicly shaming 12 Years a Slave director Steve McQueen at an awards event, labeling him “a garbageman”).