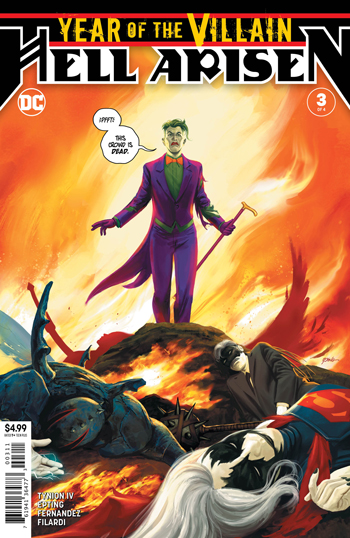 This book is kind of a disappointment for me.

I really liked the build up in the Year of the Villain storyline over the past few months. Yet, this has nothing in it that makes me want sit up and pay attention to it.

Oh, well. At least the art by Steve Epting is as fantastic as it usually is.

We get to see Lex Luthor beaten down at the beginning of the issue with some of the infected holding him down. The infected are the people who have been tainted with the disease of the Batman Who Laughs. It is a harrowing scene quite honestly at the beginning.

Then, it goes downhill quick. The real Joker shows up to gloat and tell everyone how great he is.

The Joker actually frees Lex by shooting everyone else. The two of them then teleport out of there and get someplace safe.

The rest of the issue has Lex and the Joker teamed up. They try to formulate and enact on a plan to stop The Batman who Laughs. But sadly, it just goes all over the place at this point.

And it really doesn’t add up to much.

At the end of the issue, Lex stages a big showdown at the Hall of Justice. It is super wacky and I wasn’t very into it so it didn’t have much impact for me. It felt flat to me, and I know the creators thought they were doing something exciting. Sadly, it didn’t connect and land for me.