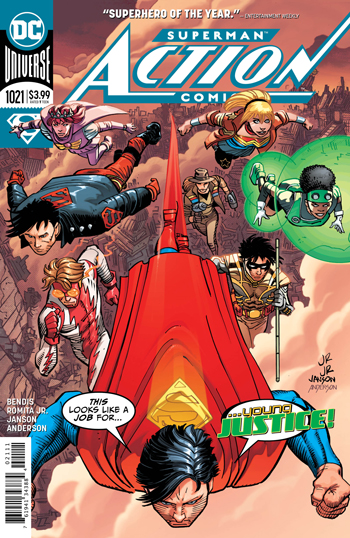 This is yet another chapter in the Brian Michael Bendis Superman era. The current storyline could have ended three issues ago, but Bendis can’t help but drag it out. It is brought down even more by the fact that all of the elements are there to make this a good story.

It just isn’t one.

The beginning of the issue takes place in the Hall of Doom. Lex Luthor is giving his fellow villains their marching orders. He is getting them ready for the big forthcoming confrontation with Superman and the heroes. It is a typical Bendis flashback and then we are jolted to the present.

Superman makes a play to try and take Lex Luthor out.

He flies towards Luthor, but Luthor seems to be able to hold Superman up. That is when Superman meets Luthor’s newest associate, the Red Cloud.

And that is then things really start to get wacky. A little too wacky.

Luthor then taunts Superman. He talks about how great he is and how much Superman stinks. Superman eventually rages and retaliates.

Then, the book just kind of ends. I feel like there was a lot of build up that just led to a whole lot of nothing.

So, yes, this book left me feeling empty inside. It feels like a waste of a few issues as this is super anticlimactic.

The only part of this issue that is of any real worth is the art by John Romita, Jr. It is some of his best work. It is just sad that the story isn’t there to match it.