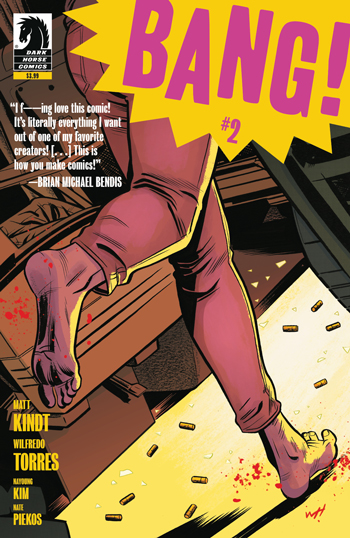 I really enjoyed the first issue of this series and this issue is pretty great, too.

Writer Matt Kindt has come up with an amazing concept here and it is just a hell of a lot of fun.

Honestly, this is one of the best new books to come out this year. It is just well done overall.

This issue follows the character of John Shaw.

Shaw is very much a character like Bruce Willis in Die Hard.

The book opens with Shaw on a train and two of the fellow passengers recognize him. That’s when we get the Die Hard-like flashback. And it is simply awesome.

We get to see Shaw take out the terrorists!

It is as exciting as can be. He even does it with his shirt off, which I found hilarious. He also finds the time to say some snarky one liners. Shaw saves the day and he is hailed as a hero.

But Kindt has more on his mind than a simple Die Hard tribute in this book.

Right after that, Shaw is in peril again. Sure enough, there are terrorists on the train trying to kill Shaw! Apparently, he is going up against a villain named Goldmaze. They have an explosive confrontation which has to be seen to be believed.

Then, we have an epilogue where Shaw meets with Thomas Cord from the first issue.

This ending gives me the feeling like something big is coming for the last two issues. Kindt writes a great story and artist Wilfredo Torres does a really great job collaborating with Kindg and drawing it. Torres can make anything work with the art and he does so effortlessly.

This is a damn good comic!