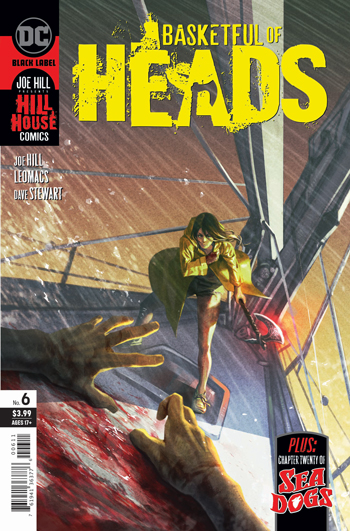 To say that June Branch has dealt with a lot would be an understatement. She chopped off several heads with a mystical ax that keeps its victims’ heads alive.

In this penultimate chapter, June took another head, found her boyfriend Liam, who might be an FBI agent and Brody Island’s crooked police chief, Clausen.

Joe Hill, despite all the horror he’s put June through, gave her room to grow. The first couple of heads June took were out of fear, desperation, and self-defense.

This time, June went on the offensive as she hacked off her thumb to break free from being handcuffed.

Then, June lopped off the head of the Hank Clausen, the police chief’s son who held her captive.

It is weird to see June getting used to her predicament, but it’s also reassuring because now she is ready to fight.

Leomacs produced his best illustrative presentation of the series. Depictions spoke more than words in almost every instance. June went from flappable rookie to grizzled veteran when she placed another head in her expanding basket.

June took control of the messed-up situation and prodded heads for Liam’s whereabouts. Some of the heads talked trash to June in response to her questions. It was amusing because the heads acted as if they could still put June in her place until June made them think twice. It was also funny to watch Hank get his just deserts as he freaked out while the heads of two of his father’s co-conspirators insensitively told him to stop whining. Hank begged his father for help and was met with indifference, which is ironic since Hank had no sympathy for June when he tortured her in the last issue.

June received some new information, which connected a lot of dots. It was mostly exposition, but the talents of Leomacs prevented it from being dull. T

he book concluded with June’s search for Liam going all sorts of wrong. It would be surprising for June to meet her demise in the cliffhanger. Liam could make a last-minute rescue, but the obvious isn’t Hill’s style. It’s hard to predict if June will save the day or if Chief Clausen will prevail. He’s taken a lot of losses he doesn’t know about, yet and Liam is a wildcard due to the possibility of his undercover assignment.

Joe Hill and Leomacs created the perfect gore-filled primer and next month’s finale. Odds are readers who will benefit from the fruits of their labor.