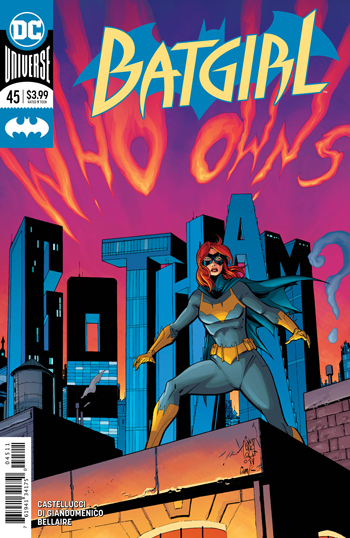 This comic has turned itself around recently with the guiding hand of writer Cecil Castellucci. Here she is joined by ace artist Carmine Di Giandomenico.  Together, they have crafted a really great story here, one that is incredibly enjoyable. And you can’t ask for more than that.

The opening of this book shows Batgirl fighting against some sort of crazy entity that is infecting people. She has a tussle with it but it gets away. The fight is beautifully drawn by artist Carmine Di Giandomenico. It is clear, precise, and just plain awesome.

Meanwhile, Jason Bard isn’t feeling very well since he has returned from the Unearth.

Did something happen to follow him out of the portal?

It is starting to look like something did and that it is something quite terrifying indeed.

Batgirl meanwhile is trying to figure out just what is going on. She eventually crosses paths with Batwoman.

Yes, Batwoman makes a surprise appearance! It is pretty awesome. They have a very quick team-up that doesn’t end very well for the both of them.

This issue ends on a cool cliffhanger.

I immediately wanted the next issue right away. Castellucci and Carmine Di Giandomenico do an amazing job with this issue yet again and I am loving the direction this has taken.