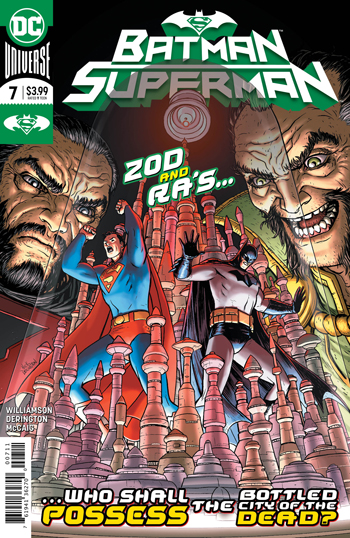 This is the beginning of a brand new storyline on this book.

It also is my favorite issue of the series thus far. It is because of the artwork of Nick Derington. He is one of my favorite artists out there and I will buy anything that he does. This issue is fantastic and well worth it just for his art. The story isn’t half bad either.

The issue starts off with a brief history of the city of Kandor.

We get to see what life was like for the people who lived there. And then we see the time when Rogol Zaar destroyed it. It is an emotional flashback especially as drawn by Derington. I was immediately hooked.

We then see an angry Zod.

He isn’t letting things go. We see him fly off in a really bad mood. We then get to see almost a montage of Superman and Batman in some crime fighting adventures. This is when the plots really starts going into motion.

The Dynamic Duo are on the trail of the Kryptonite Man on Stryker’s Island. It isn’t long before they are in a fight with a mysterious person. It turns out that the person that they are fighting is Ra’s al Ghul. He then teams up with them as they all have a common goal.

It isn’t long before the three of them go up against Zod.

Zod wants Kandor to live. And he might just get his wish at the end of the issue. This is a fine story. I look forward to seeing how they resolve it all. This issue has good writing combined with some great art.