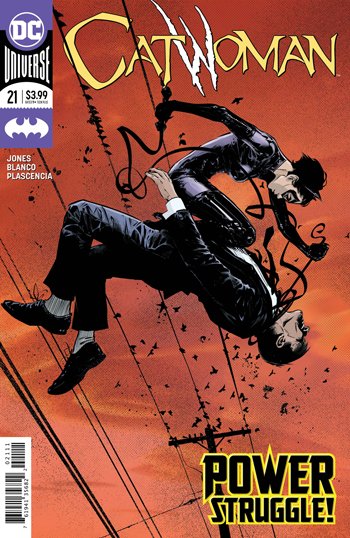 This is the conclusion to the Villa Hermosa saga that started off the series.

Writer Joelle Jones takes all of the elements she had introduced throughout the series and gives us their natural conclusions.

It is basically Catwoman versus Raina Creel in a battle to the finish in this issue. It is pretty damn great.

The book opens with a very cool splash page of Catwoman outside of Creel Mansion. She is ready to fight and kick some ass. And that is exactly what she does!

She goes and attacks Creel’s army of the infected people in an all out battle royale! And let me just say, it is pretty spectacular.

The action is beautifully drawn by artist Fernando Blanco. The page design is great and the book really moves.

Catwoman eventually comes up against Raina Creel. The two of them have a confrontation.

And then, we get a flashback.

At first, I thought that this really didn’t fit. But, I was wrong as this flashback is truly integral to the story being told. We head back to the present and that is when we get to see the final fate of Raina Creel. It is well handled.

The ending of this issue leads directly into the big anniversary issue coming out next month. And I honestly could not be happier.

Jones has done a great job on this book and each issue just gets better and better. I can’t wait to see what is coming up next!