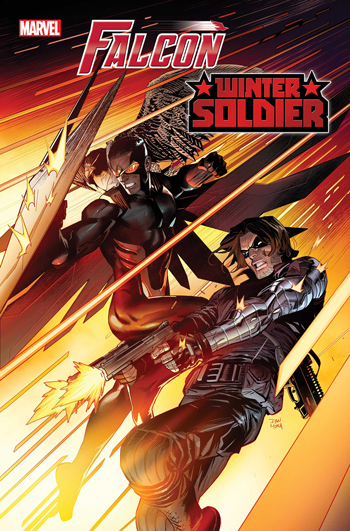 When I first started reading comic books there was no local comic shop or ComiXology.

So whenever I lucked into a spinner rack, I would grab a book and flip to the last page. I would avoid spoiling the ending. You see, I only wanted to know if the story was to be continued or if it was a single issue story.

Six year old me could not live with the idea of not knowing how a story would end. God knows if I’ll ever see the next issue on the spinner rack. The idea of issues being collected was crazy.

Falcon and Winter Soldier in a series? With a Disney+ series scheduled later this year? Sounds like someone wants a collection on bookstore shelves before the Disney+ series.

This first issue would have stayed on the spinner rack. Not that it’s bad. But it’s slight, and it screams, “This is only Part 1. Just you wait!”

This first issue brings the action quickly, not hesitating to grab the readers attention.

Bucky Barnes, Winter Soldier, is attacked in his home by what appears to be a SWAT team Action sequences like this, on the page, can be unclear or confusing. However, one gets the sense the writer and artist collaborated extensively to deliver these pages. The action taking place in a small home, a relatively confined space, is delivered crisply and clearly.

We are then shown The Falcon, doing some investigative legwork. The information takes him to the blandly named yet mysterious Office Of Federal Utilities.

The next couple of story beats are of Bucky Barnes feeling morose, which if you read it once you have read it a thousand times.

We are introduced to two characters which seem to be setting things up for later issues Veronica Eden works for the Office of Federal Utilities. She’s introduced as hung over and a general all around mess. But I can’t help but think she’s harboring secrets. But if she really is only as she appears, then having a character who’s basically “Dirty apartment, drinks a lot” is a waste.

We are introduced to an interesting villain, The Natural.

He has a dash of Damian Wayne, but he’s also a fanboy of sorts. I look forward to seeing how he is used. It might just be a case of the villain of the story being more interesting than the hero.

The action between The Natural and the Falcon and Winter Soldier is quick, tense, and tight.

So we are left with a a first issue that is light, has a couple of action sequences that are well done, and nothing really memorable.