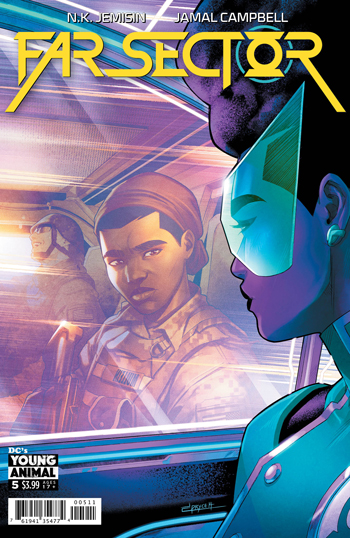 “Let’s discuss that job offer then.”

The first, is that finally we get a bit more of newest Green Lantern Sojourner Mullein’s background. Always good to have an origin story, and so far that’s been too much missing from this book.

It helps, for example, to see that Jo has had several chapters of excellence and heroism in her life already.

One grounded in her family, her culture, and a much-needed modernized view of justice – or its lack thereof – in the world.

And, finally, also we meet for the first time Green Lantern Mullein’s benefactor.

Or benefactress, I should say. The scene of that first encounter showcases a nifty bit of artistic cinemagic, courtesy of Jamal Campbell’s fine sensibilities – which is on full display, once again, throughout this book.

To be sure, there are still some unanswered questions to be addressed. But never fear, whatever else Jo’s mystery woman may be adept at demonstrating – there’s always a bit of blue in the mix.

The second important development is a little more information about the @At, which we’ve also needed a bit more of. We already know that this curious, AI race of living data, has extraordinary processing power, are the designers of the DNA hack that imposes the Emotion Exploit in the other two biologic races, and even that they (at least some of them) have more access to Earth’s media – and it’s data – than we might otherwise have assumed out here on the bleeding edge of known space.

Jo’s virtual assistant, CanHaz, is our closest window into the world of the @At, but to date it continues to seem that Jo’s rather disarmingly anime companion has had far more access to Jo’s activities, than we’ve have about her own.

Except that there does seem to be an alarming undercurrent of exploitation at work in @At society, one which CanHaz anyway, shows remarkably little curiosity about. Almost as if it were hardwired into the operating system. Whatever that system actually is.

Worth mentioning in closing that N.K. Jemisin is catching her stride by now. This issue shows just how quick a study she is. Her use of visuals to move along her narrative, for example, has become quite excellent.

Seems to be getting used to that ring.