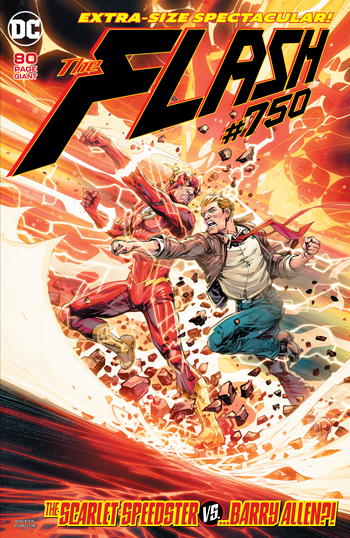 Now this is how you do an anniversary issue!

I do quite enjoy that DC is taking these milestones of their characters seriously. They have given us some cool stories by some great creators. This anniversary issue follows suit as it has some really great stories in the Flash universe!

The first story is by Joshua Williamson and artists Rafa Sandoval and Stephen Segovia. This starts off as a story that talks about how the Flash changed people’s lives.

We get the testimonial of a man who was going to rob a bank and how the Flash affected his life.

After this, we get to see many instances that help Barry become a legend.

From there, we get to see Barry surprised by the appearance of Godspeed. They go off on an adventure. Eventually, they come up against the villain of the story. This villain turns Godspeed against The Flash. And that is pretty much the cliffhanger we leave off on.!It is a solid story to start the issue.

The second story is by the classic Flash team of Geoff Johns and Scott Kolins. It pretty much is a simple story of Captain Cold getting a beer in a store. While he is there, the place is robbed. That is pretty much the gist of the story and it is pretty decent overall.

The next story is by Brian Buccellato and Francis Manapul. It is a great little tale that has Iris ask Barry why he has to be the one to always be the hero? Barry uses a device to find other worlds where Barry never becomes the Flash. On one world, Gorilla Grodd is the Flash. On other one, Iris is the Flash. It is an intriguing tale by two top flight creators and they really do great with it!

Next up is my favorite short story of the issue entitled “Flash Of All Worlds!” It is by the amazing creative team of Marv Wolfman and Riley Rossmo. It is a great story that has the Flash fighting against the Mirror Master. Wolfman writes a good story and Rossmo is the perfect artist for this.

The next story is by Joshua Williamson and David Marquez. It is a quick Jay Garrick Flash tale that is truly awesome. I was only sad because it so short but I would love to see a Jay Garrick series with these two creators doing it. This is a pretty awesome story.

Finally, we get an epilogue to Flash Forward at the end of this book. We get to see Wally West imbued with the power of Doctor Manhattan. We also get to see Wally taking a look at his past. Scott Lobdell and Brett Booth do a great job on this story. It is a nice segue to what is coming up.

The end seems to set up a Parallax kind of story. I can’t wait to see what happens next.

This is a great issue and it is solid all around. Happy anniversary to The Flash. This book is a tremendous way to celebrate it.