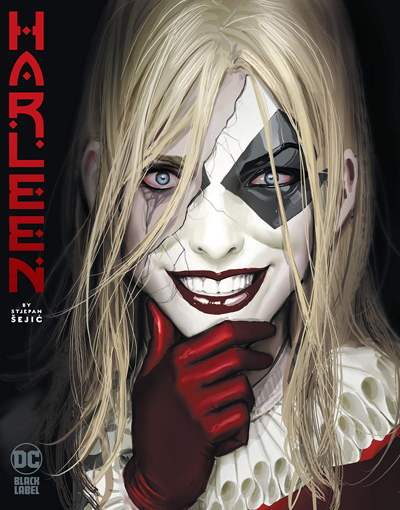 Both characters are insane.

Both demolish the fourth wall frequently.

And both are two of the few breakout ’90s comic book characters with the longevity and appeal to become pop-culture phenomena.

Harley wasn’t always like Deadpool, and Stjepan Šejić’s Harleen travels back to the time before Harleen Quinzel became Harley Quinn.

If you don’t know the story, Dr. Harleen Quinzel is a talented psychiatrist who begins treating the Joker in Arkham Asylum, only to fall in love with him and lose her mind in the process.

But where Mad Love focused on the reasons why such a pairing is horrific and unhealthy, Harleen softpedals that aspect, telling a more romantic rendition of the tale.

Credit where it’s due to Šejić, who imbues his Harleen Quinzel with more depth and psychological complexity. The writer/artist takes his time getting into her head, detailing her growing fascination with the murderous clown in grueling detail. As the story is solely concerned with how Harley Quinn came to be, Šejić methodically presents the Joker’s seduction of his doctor.

Unlike the Dr. Quinzel of Mad Love, Harleen goes in prepared, having studied Joker enough to see through his numerous backstories as elaborate ruses to gain sympathy and string previous doctors along for his sick amusement.

And yet, Šejić’s take on their relationship suggests that Joker may be just as fascinated and crazy about Harley. His strikingly handsome rendering of the Joker adds to that interpretation. The two characters have chemistry that radiates from the page.

The problem for me is that the story ends with Harleen taking on her new mantle and leaping into an uncertain future. Šejić implies somewhat that the Joker is manipulating her, but doesn’t discuss the outright abuse she later endures. Instead, he opts to shade it as more of an unconventional romance.

In a vacuum, this works if you consider the book a trashy romance novel. But in a world where Joker and Harley have been adopted by some corners of fandom as that sort of strange yet tender love between psychos, it’s kind of harmful not to acknowledge how toxic it is. It speaks to the enduring power of Dini and Timm’s work that the core of the story — a woman who tries to change a bad man, only to end up changed as a result — still shines through.

Then again, I shouldn’t bag on a book that works hard to paint a complex portrait of a woman whose own bad decisions lead her into danger, instead of being tricked. He gives her an agency that her creators never quite afforded her. I also appreciate how he works Harvey Dent into the story as a parallel to Harley, and how artfully he ties Bruce Wayne in as well.

But the biggest reason to recommend the book is probably Šejić’s gorgeous artwork. His linework and colors are exquisite, his body language is excellent, and the way he plays with layout in order to let us into Harleen’s crumbling psyche is brilliant without being overstated.

In the end, Harleen has its strong points. If you like comics and Harlequin romances (haha), you’ll probably find it entertaining. But one wonders if it could have gone deeper in its exploration of how toxic a pairing Harley Quinn and the Joker truly are, if only to help shatter the inexplicable glorification of such a relationship.

If nothing else, Harleen makes you appreciate just how well Harley has come into her own, without Mr. J.