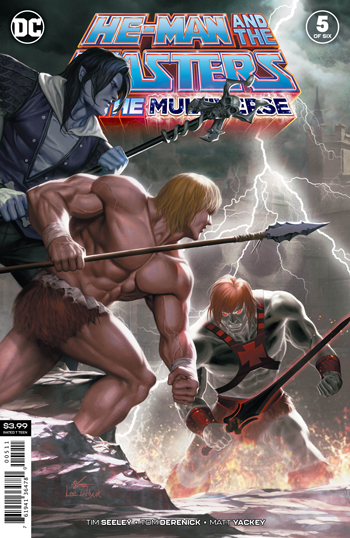 Tim Seely has taken readers on a journey to every known incarnation of MOTU.

If one person gets their hands on both halves of the sword, they would possess the key to unlocking the power of Grayskull.

Unlike every other version of He-Man, Barbarian He-Man isn’t shackled by cartoon morality.

He will kill evildoers who dare cross him or invade his land. The mini-comics were a little more violent than their universal descendants, which makes Barbarian He-Man the best option to square off against Anti He-Man. Tim Seely mainly produced a fight that no one knew they wanted because neither version holds back in the fisticuffs department.

When the two musclebound titans locked horns, it’s a brief fight but engaging because Anti He-Man was put on his heels for a little bit before landing the final blow.

If that’s not enough, he also punched Mer-Man into a pit of lava and straight-up killed Battle Cat. Prince Keldor once again tried to stop another world’s Skeletor from being a bad guy. He failed, and it would typically get old. However, Keldor is determined to prove that he is not the only good version of the character.

While the odds are increasingly against him in this endeavor, you can’t blame him for trying.

Tom Derenick is the unsung hero of this multiverse of chaos. He’s perfectly depicted every version of the MOTU universe. The aesthetic of Movie He-Man and Keldor should clash with the minicomic landscape.

It’s doesn’t, which augments the entire presentation because it’s something a lot of stories about a multiverse can’t pull off successfully.

The last two pages beautifully set up next month’s final chapter. It’s a complete role reversal of heroes and villains; however, the Anti-Eternia squad was unknown until now, which is scary considering He-Man is terrible enough.

Now, he has back up. I can’t wait to see what Seely and Derenick have in store for the finale!