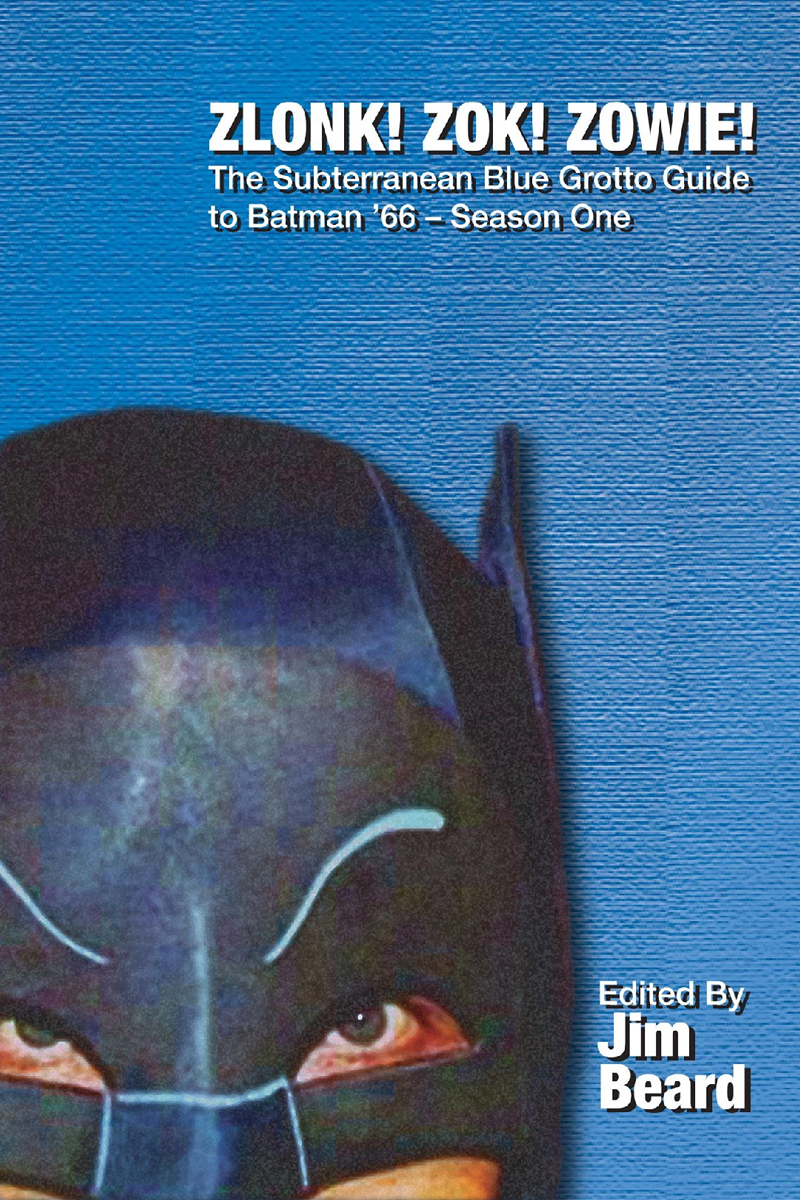 Crazy 8 Press announced today it has agreed to release ZLONK! ZOK! ZOWIE! The Subterranean Blue Grotto Guide to Batman ’66 – Season One, Jim Beard’s celebration of the 1966 classic Batman television series. This new collection of essays creatively examines each episode of the ABC series which aired during the first half of 1966.
Edited by respected comic book writer and essayist Jim Beard, the 208-page Bat-tastic collection will be released by Crazy 8 in April, both as a trade paperback and eBook.

“There’s still so much to say about this legendary TV series, and this book sets out to prove it,” said Beard, who also wrote the opening essay examining the two-part pilot episode.

The worldwide Batman TV series phenomenon starred Adam West and Burt Ward as the Dynamic Duo, adapting the DC Comics series to the small screen, riding the Pop Art and Camp craze that were trends during the turbulent 1960s. The show spawned a feature film and a bonanza of merchandising the likes of which had never been seen before.

Thanks to syndication, the show has rarely been off the air and in the last decade has spawned a fresh wave of merchandising.

Season one introduced viewers to Batman, Robin, Alfred, and Commissioner Gordon, as well as iconic villains including Julie Newmar as Catwoman, Frank Gorshin as The Riddler, Caesar Romero as The Joker, and Burgess Meredith as The Penguin. And, of course, the inaugural season thrilled fans with the Batcave, Wayne Manor, and one of the most heart-pounding elements of the entire franchise — the Batmobile.

“Crazy 8 Press is always on the look-out for kindred spirits, given most of our roots in comics,” said Crazy 8 co-founder Robert Greenberger, who has spent more than 30 years as a comic book editor and contributor for DC and Marvel Comics. “Previously, Crazy 8 released Rob Kelly’s anthology Hey Kids, Comics, a look back at the joys of comic collecting. It was high time we added to that portion of our inventory. Jim’s book project seemed a perfect fit. And as we still see today, Batman never goes out of style.”

“I’ve never ceased in being amazed and delighted at fans’ appetite for a show that lasted barely over two years back in the 1960s,” Beard added. “It‘s a testament to not only the character’s overall appeal, but specifically the unique take on Batman offered up in the series.”

Beard previously explored the television series in Gotham City 14 Miles (Sequart), an anthology of essays covering the length and breadth of Batmania. He is a regular writer for Marvel.com, an essayist for pop culture collections, and made his Crazy 8 Press debut in 2019’s Thrilling Adventure Yarns with a short story co-written with his late wife Becky.

He is already at work on ZLONK! ZOK! ZOWIE! Volume two, exploring the complete second season, to be released by Crazy 8 Press in 2021.

ZLONK! ZOK! ZOWIE! The Subterranean Blue Grotto Guide to Batman ’66 – Season One will be available for purchase on Amazon’s and Barnes & Noble’s sites, as well as various comic book, and mass media conventions.