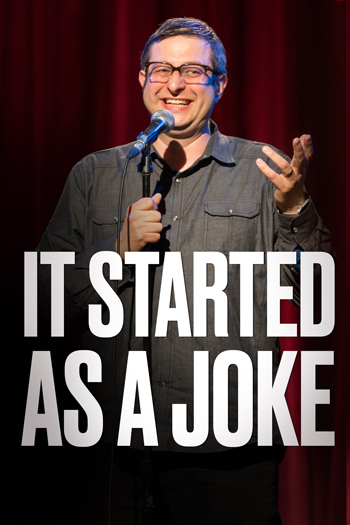 It Started As A Joke depicts the final iteration of The Eugene Mirman Comedy Festival, a decade-long series of annual performances hosted by Mr. Mirman (perhaps best known for his voicing of Gene, the flamboyant son on the hilarious Bob’s Burgers). It’s a collection of oddball Brooklynites that talented proto-hipster Janeane Garofalo describes as “comedians who thrive outside of comedy clubs.”

They are also described by a fellow humorist as “super self-aware.”

The most distinctive thing about the various performers in this film, or perhaps the single thread that runs through their collected styles, is that they are obsessed with popular culture, yet also feel somehow separated from the mainstream society. An interesting and complicated position. They project a childlike naivete, yet are preoccupied with the complications of middle age (they are not kids, the people in this flick.)

In the past, The Eugene Mirman Comedy Festival has offered a bouncy castle with a therapist inside, so adults can launch themselves around the marshmallow womb of childhood while working out their issues with a trained professional. It hired a birthday clown who also dispensed useful tax advice. Reggie Watts appears wearing t-shirt bearing the simple offhand tag “Guy Debord,” appealing to fans of Situationism and French art-world provocation. An onstage drinking game featuring NPR’s nerdy Ira Glass degenerates into sloppy revelry, later recalled as “Nerd Altamont.”

They are culturally-engaged beyond the telling of it, and their tart humor rises from their detailed knowledge of the world around them, and their belief that this world will somehow never be theirs.

At this time, the film takes a powerfully tragic turn, with Westfall being diagnosed with terminal cancer.

What had previously been an examination of a mild suspicion of adulthood and responsibility becomes a quietly terrifying rumination on fear of the unknown. The tonal shift is disorienting and effective.

We observe Mirman attempting to cope with events by creating a series of morose get-well cards illustrated in a toddler’s scrawl. This wounded project is abutted against a quietly hostile and deliberately inane comedy bit about a moose with social anxiety at a cocktail party.

Mr. Mirman and his family are in tremendous pain, and they are dealing as best they can with what they have. It’s riveting viewing.

It Stared As A Joke is an engaging and moving short film about the need to laugh and the need to belong – to be loved, however one may feel compelled to deny these impulses. Mr. Mirman and company are immensely likable folks, smart and talented. The shifting center of the film is the collision of pain and hilarity, which is not unusual to find in documentaries about comedy.

What makes The Eugene Mirman Comedy Festival particularly effective is its immediacy – the sense that events are unfolding for the first time as you, the viewers, are watching them.   It Started As A Joke is essential viewing for anyone wishing to understand how hip nightclub comedy, an infamously caustic environment, can help bring people together in an affecting way.

It Started As A Joke arrives On Demand April 3.

Guy Benoit graduated from Providence College with a BA in English. He has worked as a park ranger, dish washer, a dog catcher, a film-maker, a screenwriter, a journalist and a file clerk, amongst other things. A video he directed for Six Finger Satellite was featured in an episode of Beavis & Butthead. It was also shown on MTV’s 120 Minutes. They did not spell his name correctly. He has lived in Rhode Island, Pennsylvania and California. He enjoys conversing with sane people.