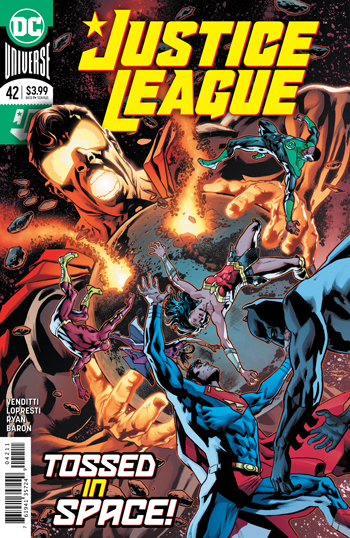 This week’s Justice League is obviously one of the middle chapters of a solid story. The pacing slows down, a reader may get impatient. Just when your tapping your shoes and looking to see how many pages you have left, the action ramps up.

Our story opens with scenes of the invasion from around the world. It shows just how the stakes are raised. It’s a little reminiscent of the old The Authority stories.

We are then shown the Justice League in retreat mode. Hiding out and planning next steps. It’s great to see Green Lantern John Stewart taking the strategist mantle from Batman. Even if it’s momentarily.

Meanwhile, Wonder Woman has been captured by the Eradicator.

One hopes that Wonder Woman’s treatment is just setting up an epic beat down of the Eradicator by Wonder Woman.

Superman shows up to assist Wonder Woman, and we get a couple of solid action scenes at the hands of Aaron Lopresti. Lopresti was a contributor to Gail Simone’s Wonder Woman run and it’s always great to see his work.

One of the great things about comic book stories that you do not often get elsewhere: Science vs. Magic. It’s always fun how comic books just make up the rules as they go along. The best stories just encourage you to roll with it. This issue of Justice League does a good job of that.

Whatever twist and turns the next chapter of this story has, here’s to hoping that it includes four or five pages of Wonder Woman mopping up the Eradicator.