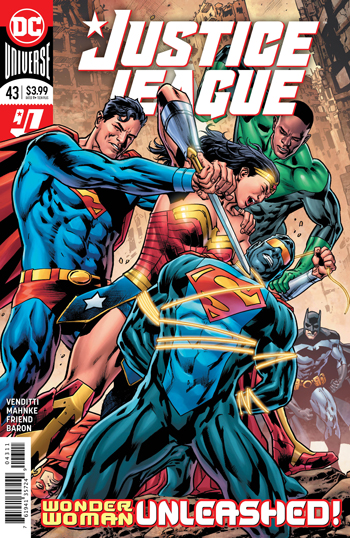 One of the key tenets of professional wrestling is to have the heel destroy the hero for twenty minutes before the hero makes an amazing comeback to vanquish the hero.

Heck, it’s one of the oldest stories ever told.

Venditti balances the cast in such a way that everyone shines. Mahnke has a real unique way of capturing the Justice League in action. This issue gives Mahnke plenty of room to stretch.

Well here he is.

John Stewart’s plan from the previous issue comes to fruition and the Daxamites are powerless. Flash’s effort to get the Daxamites takes him out of commission. But the rest of the Justice League is there to take the Daxamites apart.

With his plan falling apart, the Eradicator makes the ultimate heel turn and destroys his allies. It has been a long time since I have seen the Eradicator written as evil as he is here.

Wonder Woman gets to perform an epic beat down of the Eradicator. Superman gets moments o heroism and humanity. Batman reminds us that he is human on a battlefield with Gods. This issue hits all the marks of what makes the Justice League work.

Will this story be remembered as one of the most memorable Justice League takes?

I don’t think so. But if you are going to share with a non Justice League reader, you could do far worse. It is solid escapist fare. God knows we need some escapism right about now.