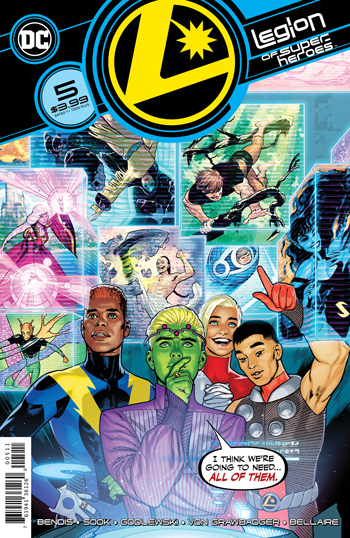 Man, what a missed opportunity this comic book is.

The Legion is filled with a great group of characters.

Yet, in the hands of writer Brian Michael Bendis, they are bland. He really was the wrong choice to write this book. This is a boring, and uninteresting series.

The people of the future are now dealing with the ramifications of that.

That means that this issue is filled with the typical Bendis dialogue that seems to be getting more and more painful these days. He makes certain things silly and then it undercuts the serious moments.

It is starting to look like the Legion is finally united. They look to be able to unite and save New Earth.

And it is so damn boring.

Bendis doesn’t put in a single action scene and the absence of one is felt.

Those looking for escapism in this comic can look elsewhere.

The whole issue just mutters on. And on. The only thing that grabbed me was the part at the end showing a bit of back story of Jon Kent. But it is brief.

And that is when I realized that there is not a single developed character in this comic besides Superboy. That says a lot.

Bendis seems lost as to what story he is telling. The artwork is good especially by Sook. But there just isn’t a lot to grab onto here.

This book seems lost in space and is headed to oblivion.