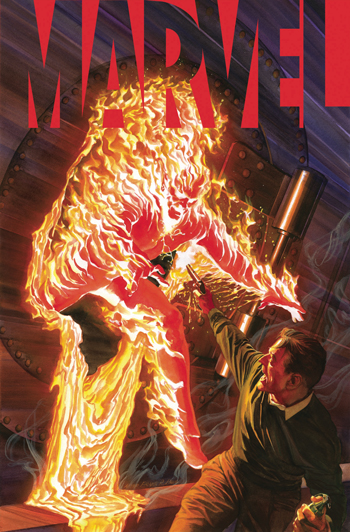 “And now I have the best of all possible worlds… Your world.”

When Alex Ross and Kurt Busiek came together to create Marvels back in 1994, it was greeted with much fanfare, and for good reason.

The limited series was simply a fantastic showcase for each man’s talents, easily cementing their careers in the industry.

Alex Ross in particular wowed readers with his beautifully painted, hyper-realistic renditions of everyone’s favorite Marvel heroes, unlike anything we had seen before.

Marvels was a perfect platform for his work, and fans have been hoping for more in the same vein ever since, with at least a few attempts in that direction over the years.

Now, happily, both men are back, each with a different project done in the spirit of that original blockbuster series.

Kurt Busiek helms Marvel Snapshots which we are told will feature stories from the perspective of ordinary people, just as his own original script in Marvels first did to great effect.

Alex Ross, at the same time, is in charge of Marvel, a limited series designed to showcase exceptional talent, telling classic stories of mighty Marvel magic.

That’s always a somewhat uncertain proposition in an industry overflowing with talent. Everything depends on the artistic judgment of the managing editor, and how effectively they manage to select and match that talent together.

So, is Marvel that good then? Oh yes. Yes, it is. Heck, if the first of the run is any indication, this Marvel project may very well be even better than Alex Ross’ first. And that’s saying something.

Ross starts things off with author Steve Darnell to lay the groundwork rationale for our series to be able to ping pong all over the very best creative periods of the Marvel Universe: a little world conquest bid by the dark godling Nightmare, one that very helpfully gives him access to the dreams and memories of everyone on earth.

It’s a typically creepy comic villain scenario, but with the added glam and gloom of Ross’ high glossy portraits to delight the eye and set the mood. Then in short order (after a brief period of requisite monologuing, of course), we segue easily into the two stand-alone stories of the issue.

And boy wowza, what a showcase.

First up is Frank Espinoza and Sajan Saini to tell a near pitch-perfect story of everyone’s Friendly Neighborhood Spider-Man.

Peter’s down on web-fluid, and that’s bad on a day he has to deal with the rampaging Rhino. Which is still nothing compared to Mary Jane. But that’s the life of a superhero when you live in the Marvel Universe. Or Nightmare’s..

It’s a simple set-up, but Saini’s dialogue – and even better, Peter’s own inner monologue – captures Spider-man like few authors have managed since his early days. Equally splendid is Frank Espinoza’s singular artistry. Like Alex Ross, Espinoza paints his subjects, and his work is so engaging and well-executed, it’s simply a joy to behold. The brief snapshot of Peter’s rogues gallery is classic work. And the Rhino’s rarely looked better. A-plus work all around.

Just on its own this gem is a triumph. But from there we jump straight into something completely different: a story of the earliest days of the Avengers by none other than Kurt Busiek himself.

On the assist for Busiek, is artist Steve Rude, whose work is a more-than-credible homage to the great Jack Kirby. The composition, the faces, the great dynamic action style that was singularly Kirby’s is all on full display here – and that’s good because the Avengers Iron Man, Captain America, Wasp, and Giant Man are up against their one-time teammate… the Hulk! All big, green, and mean – and determined to win his old friend Rick Jones back from the assemblage of Earth’s mightiest heroes. Which makes… sense.

Busiek has enough comics chops to make this more than just a simple dust-up, and our story’s conclusion has enough classic soap opera uncertainty and pathos, to leave one feeling that indeed we’ve discovered a long-lost Avengers story to brush off and enjoy. And there’s nothing wrong with that.

Look, simply put, this project is an absolute joy for those of us who love the medium. It’s created from that joy, and offered in that spirit, and both are inescapable.

I cannot wait for the next issue. And that’s something I haven’t felt – really felt – for some time.

Do yourself a favor, and go get this book. This is one for the collection.

Next Issue: So where’s Dr. Strange when you need him? Oh… oops. Never mind.