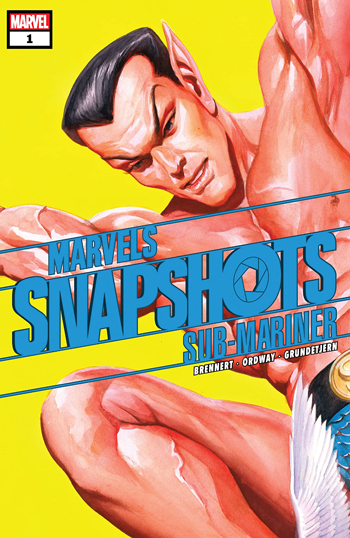 Marvel Comics has decided to explore the world from the hit miniseries Marvels from the 1990’s once again.

This issue focuses on the Sub-Mariner. I wasn’t too excited to read this at the very beginning. Then I saw the creative team. This is a solid book by some older creators who are still doing some excellent work.

The book opens in the 1940’s with a girl named Betty talking with her family. In the news, The Invaders have gone to war in Berlin. Betty’s family is having a typical day together at home as a family.

But it isn’t as typical as it initially looks. Why is that?

Well, it is because Betty has a date with Namor, the Sub-Mariner.

This is a pretty wacky concept from the get go but the creative team really makes it work. Betty and Namor head on down to Coney Island for some fun.

They walk around. They get some french fries. Namor plays some carnival games to win Betty a prize. They are having fun.

That is, until they come across some criminal activity!

Namor comes up against a super strong man-shark that is also a Nazi! They get into a cool brawl! Everyone clears the park. This date isn’t going as planned! This leads into the ending of the book which was actually pretty perfect. This may feel like a simple story to some but I simply adored this comic because of it.

This is a really enjoyable book. The writing is wonderful and has a great classic feel to it. And man, I have missed Jerry Ordway doing the art. He is great as always.

This book is a rare treat. I can’t wait to read it again. It’s fantastic.