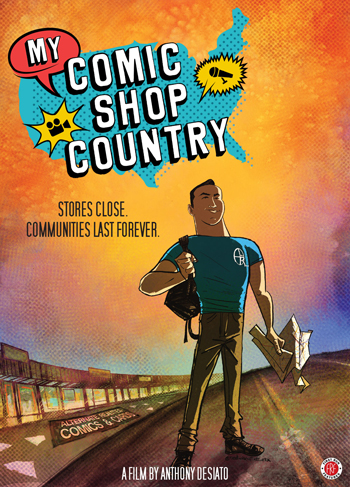 I was the night manager of a beloved video store in Philly for many years.

It was a niche store, and we took pride in that and so did most of our customers.

In the mid-aughts I saw the writing on the wall and moved to LA to pursue other options.

I miss those days, though. And I also miss brick and mortar video stores as a customer.

This thoroughly entertaining doc takes a similar look at the circumstances and fate of comic book shops.

Hey, I used to semi-frequent Meltdown Comics here in LA, and when I get the chance I still stop off at Brave New World Comics in Newhall, CA.

But it’s not a secret that maintaining a comic book shop in this day and age is difficult, to say the least.

This doc explores the appeal and allure and ultimately, the likely fate of comic book shops in this current era.

Armed with a charmingly 90s-ish song soundtrack, the film explores the ever-changing business practices and models of running a comic book store over the years, including focusing on Marvel/DC/Dark House vs indie publishers, toys and novelties, back issues versus in addition to new releases, etc.

But the main focus is on the owners and managers wanting to continue due to their passion.

Most of the owners and customers value the camaraderie above all else.

Customers can order the latest goods online if need be.

But the community of hanging out at a physical store is very different than just clicking a few keys then yakkin in a chat room about the latest Batman comic.

The best moments of this film are spending time with the owners and the fans as they hang out and debate the latest issues.

In the end, My Comics Shop Country is inspirational, in that these dudes and gals are pursuing their dreams and taking part in a like-minded fanbase, despite the financial and personal setbacks.