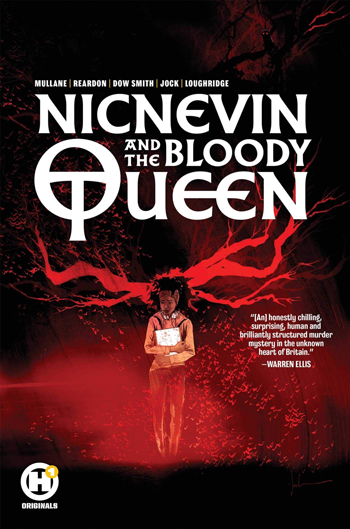 This is a nice little horror story that is reminiscent of some of Mike Mignola’s best work. It is a horror book for sure, but it also has some really great characters in it as well.

Hopefully this book catches on as it is a really great little offering from the Humanoids line of books.

She is forced against her will to go live in a cottage with her mother and her brother. The cottage is in the middle of nowhere and there is not a lot to do there.

And that is when she meets a mysterious man.

Suffice it to say, the mysterious man turns out to be not so nice of a guy. He does some horrible things to her.

And then, Nissy starts to check out her town and the surrounding woods. She starts having visions.

These visions lead to some terrifying things.

Her brother finds a body while playing soccer. This leads into Nissy finding out that the mysterious man has been killing local women to bring the Fae Queen and her disciples to Earth.

Things really intensify from there. That leads up to the ending, which is exciting and a bit baffling. It was cool enough, though.

This is a fun and exciting book. The characters aren’t as developed as one would hope. Nissy especially seems very one dimensional. Still, the art is fantastic and the atmosphere is perfect. Nevertheless,  it kept me interested from the first page to the last.