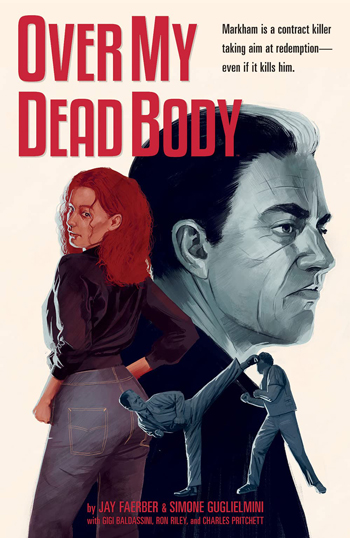 Jay Faeber and Simone Guglielmini team up for the pulpy graphic novel, Over My Dead Body. A plot idea that should work, but the execution is off and it doesn’t quite hit it’s mark.

Markham is a hitman who has a near death experience. His experience leaves him wanting to make up for his evil deeds.

In prison, he seeks redemption by saving lives. Seeing that he is a better person, the Warden takes kindly to him. Along the way, the Warden’s daughter has fallen for a prisoner who has been released on a technicality.

Once freed, Markham arranges to ingratiate himself with the white nationalists by….let me go back and read that.. oh boy.

He stages a fight in which he beats up his black friend in front of the racists. I can’t help but think there had to be a better way to handle this. I wouldn’t call it a racist depiction but definitely a clumsy scene.

Markham gets in with the group, though. He ends up getting tangled in with FBI agents, bank robberies, and assassinations.

The whole thing reads like a great idea that was not well thought out. The dialogue is way too on the nose at times.

You can almost hear the plot grinding along to keep the story moving.

The art manages that pulpy, grimy feel. But once the action kicks off some of the scenes come off unwieldy and poorly staged. A fight scene near the halfway mark leaves you wondering what is going on.

Over My Dead Body is to Criminal as any generic mid-90’s crime thriller was to Pulp Fiction.