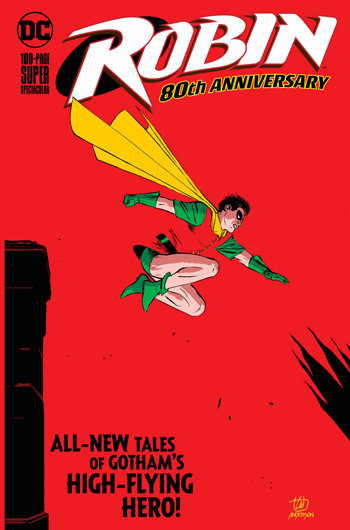 DC has decided to celebrate by putting out a supersize special like they have previously on other characters.

This is an nice compilation of new stories.

The first one in this book is by Marv Wolfman and Tom Grummett.

This story is basically about Dick not doing as well as Batman might have hoped. Dick Grayson is still new as Robin and this story shows him wanting to prove something to Batman. It is good to see Grummett doing the art, but the story is pretty boring, especially for the opening story of an anniversary issue.

The next story is by Chuck Dixon and Scott McDaniel. It is a story about Nightwing and just like the first story, it fails to leave an impression. It literally is Dick Grayson saving people. This story, like the first, feels like a inventory filler story that they commissioned in the 1990s and forgot them both. Yes, it feels like a filler story.

And so the next one carries on with that tradition. It is by Devin Grayson and Dan Jurgens and it features Nightwing and the Titans on an adventure. This one is just plain awful and the “reveal” of who is pushing buttons of the Titans is pretty cringe worthy. Moving on.

The next story is the first good one and it is written by Tom King and Tim Seeley and drawn by Mikel Janin and it has Dick in his Grayson persona. It is a nice coda to the Grayson series, too and it just really works well. This was a good story.

I loved the next story as well about Jason Todd. This issue is written by Judd Winick and Illustrated by Dustin Nguyen. It shows Jason as a young Robin in contrast to him as the Red Hood now. It is a nicely handled story and I really enjoyed the flow of it.

The next story by Adam Beechen and Freddie Williams III. It is really a great one. Tim meets up after school with his guidance counselor. His guidance counselor is very discouraging about Tim’s choice to go into law enforcement. This discussion is intercut with scenes of Tim fighting crime as Robin. It is an amusing and enjoyable story that really does a lot with the space that it has.

The next story is by James Tynion IV and Javier Hernandez. In this story, Tim Drake seeks some guidance from the previous Robins, Dick Grayson and Jason Todd. The story is pretty basic, but Javier Fernandez kills it on the art. The story is pretty to look at, without much substance at all.

The next story is a nice little treat. It is by Amy Wolfram and Damion Scott. In it, we get to see the Stephanie Brown Robin. It is a simple story of Stephanie trying to fit in with Batman as his sidekick. It is a nice story and it has some great artwork by Damion Scott. I miss his artwork coming out every month on a regular basis.

Next up is a Supersons tale by Peter J. Tomasi and Jorge Jimenez. It features Damian Wayne and Superboy. It is a nice little summary of the two’s friendship. It is nicely handled and even a little bit touching. And Jiminez does a great job on the artwork side of things.

We get a nice Damian Wayne story next. This one is by Robbie Thompson and drawn by Ramon Villalobos. Basically the story has Batman and Damian in it. Batman says that they have to talk. They talk and fight through the adventure. And it is a pretty awesome sight.

The first three stories of this book were completely awful. But it does pick up after those. I am glad I hung in there. For the most part, this is an awesome anniversary issue, and I look forward to the next one DC puts out.