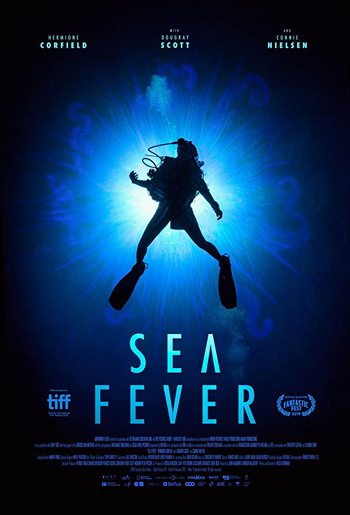 Siobhan (Corfield), a socially awkward young woman, is assigned to tag along on a trawler as part of her marine biology studies. She’s rather unhappy about it, but not as unhappy as the ship’s crew after she removes her hat for the first time.

She’s a redhead, and much of the crew still subscribes to the old-school sailing myth that redheads are bad luck on an ocean voyage.

Still, they make the best of it for a while.

That is until they come across a large mass under the vessel. Soon, small cracks in the hull begin oozing a dark liquid which, Siobhan deduces, is biological.

The boat’s owners, a couple well-played by stalwarts Nielsen and Scott, are obviously concerned but after a terrific payload of fish, they are desperate to get back to shore with the goods.

Things really take a turn once a portion of the crew enter a nearby, seemingly empty boat and make a startling discovery.

The premise is basically The Thing meets Jaws, and while that likely sounds tantalizing to horror fans, the execution is uneven.

Pacing is the real issue here. The first half is just fine, culminating in a truly effective scare/gross-out moment.

Things nearly grind to a halt for a while, alas, with the acting keeping things afloat (sorry).

Effects and technical aspects are just fine, but the halting narrative definitely takes a toll.

Also, there are some head-slapping moments, such as when someone who knows better reaches out and touches an unknown, possibly toxic substance (shades of Prometheus, and that ain’t good).

Still, worthwhile for the good stuff, and Corfield (so good in smaller roles, such as Mission Impossible: Rogue Nation) makes an appealing heroine.

It’s a shame the whole thing isn’t better, but the ending is quite satisfying, and makes up for a lot.