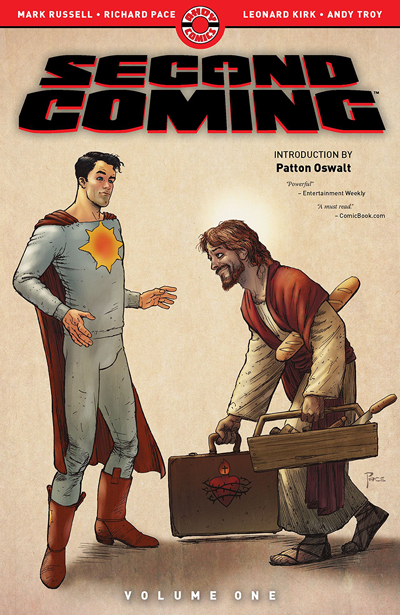 Second Coming has a great idea that sells itself: What happens when Jesus Christ comes back to Earth as the roommate of the world’s mightiest superhero?

After arriving at that premise, though, the bigger question remains: What kind of story would that be?

Regarding religion, is it biting satire of modern-day Christianity, or earnest polemic? As a superhero comic book, is it a meditation on the nature of power, or a twisted comedy poking at the absurdity of the concept?

Or does writer Mark Russell dare to make Second Coming all these things at once?

For this reviewer, that’s a tall order and Flying Wallendas-level high wire act, and the uneven Second Coming falls short of a revelation. It feels like a little of Dogma, a little of Preacher, a little of The Boys, with dashes of The Life of Brian and Douglas Adams thrown in.

Second Coming feels dripping in ‘90s comedy, too. Look at the superheroes in a support group with a feckless therapist, or ironically named stores. Or God pranking a new entrant to heaven and looking/acting like the public’s idea of Richard Branson – vain, angry, withholding, megalomaniacal.

That’s a pretty funny idea on its own, until you start connecting it with the wider world. This popularly Christian idea of the Old Testament God as vengeful, impatient and capricious surely would leave my Jewish friends shaking their heads and telling Russell to keep YHWH’s name out his mouth.

There’s a lot of good going for the comic, though. Russell’s dialogue and writing allows for many good jokes to be packed in. The primary conflict pops early on: Jesus seeks to overcome humanity’s greed and violence through compassion and good works, but that plan quickly butts heads with Sunstar, a Superman-like hero, who embraces quick violence without thinking first and severe punishment always.

Jesus, empathetic and low-key righteous, often is given the best moment-of-clarity writing of the series. A flashback scene in which Jesus, on that fateful Good Friday, runs into a childhood friend who likely built the cross he’ll soon carry, lands with such grace.

However, it’s the same series which often presents Jesus as a goofball failson, the dopey do-gooder who only lasted 33 years on Earth the first time around. He’d rather heal a bunch of henchmen and send them on their way, and shouts “trigger warning” upon seeing a cross atop a church. It’s the same story that makes a joke about Jesus maybe not being white, but then draws him with white skin, straight brown hair, and blue eyes.

The characterization of Sunstar as vain, insecurely macho, and often flat-out gullible and dumb doesn’t gibe with when he says he saves an average of 20 people a day. How could he be so successful while bungling missions as much as he does in this story, starting with his first appearance?

The story also often fails its one main female character, TV news reporter (and Sunstar’s girlfriend) Sheila Sharp, whose story arc revolves around her desire to have a baby. She’s so baby-hungry that she sends Sunstar to a cartoonishly Eastern European dictatorship on an adoption hunt.

Furthermore, Second Coming turns the mystery of faith into the province of idiots. Sure, that’s a fairly common idea among your atheists and self-named freethinkers, but that doesn’t serve a story in which Jesus Christ, God, Satan, heaven and angels are all real.

Also, the fact that the only modern-day Christians we meet are homophobic bigots, neo-Nazis, a prosperity gospel televangelist, and vagrants doesn’t leave much to the imagination for what Russell may think about Christianity overall.

Jesus tells us his philosophies repeatedly throughout the book to the point that the climax, which I won’t spoil, becomes a contradiction of those other ways by which Christ wanted to fix the world. The fallout of that climax goes unexplored for what Jesus was trying to do, what he learned, and what that means for his message of humanity relying on itself to purge itself of violence, revenge and greed.

Oh, and Satan shows up for a side plot that also involves uniting all of Sunstar’s villains, and it doesn’t really add up before it ends quite abruptly thanks to that climax. And the best the series can do, in the denouement, is basically give a shrug emoji and add some platitudes about how nobody’s got the right answer. God ponders in a bowling alley that religion (and family) make humanity “feel loved and inadequate at the same time.”

Jesus doesn’t dare to question what we’re supposed to do in the face of relentless, immovable evil. Even religions of pacificism have some ideas of just war. We surely can’t punch global warming or wealth inequality into submission, but that argument also rings hollow regarding the fascism and authoritarian autocracy rising around the world.

It also may be tougher to read this book and gather what the point is because it came out when a ribald, high-low comedy about the afterlife and the nature of the human experience did this so much better.

The Good Place succeeds where Second Coming fails, perhaps in part because the former keeps the human beings front and center amid all the immortal demons and cosmic judges born just after the creation of hydrogen. Second Coming spends most of its time with Jesus Christ and an immortal alien instead of the human beings caught in the middle.

Maybe this is part of why Michael Schur’s beloved, recently ended sitcom wisely avoided discussing religion. Instead, The Good Place first answered what happens after death, and then tackled religions’ other main topic: what it means to be a good enough person in an imperfect, complicated world.

As one character says in the series, “good enough” may be the holiest words in the English language. Second Coming at times far surpasses that mark, but as a whole it can’t quite get there.

Maybe reading some theology would help!