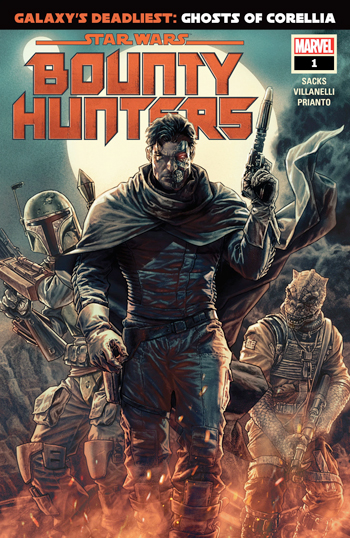 “Bounty hunting is a complicated profession.”

Bounty hunters are some of the most popular characters in the Star Wars universe.

The hit tv series, The Mandalorian, has put an even bright spotlight on this band of scum and villainy.

Beilert Valance is a bounty hunter who first appeared in last year’s Target Vader comic book. The timeline of this series begins after the events of The Empire Strikes Back.

A flashback of Valance, Bossk, and Boba Fett working a job that went wrong starts things off. In the present, the three bounty hunters have gone their separate ways until the lastest holo puck reveals bounty for the person who ruined that vital job.

Nakano Lash, Valance’s former mentor, is the bounty hunter who betrayed them so long ago.

However, Lash has a price on his head that everyone wants to collect. Our three bounty hunters are hell-bent on getting to Lash first, but each has a different reason, based on revenge.

Ethan Sacks and Paolo Villanelli took a familiar Star Wars concept and made it feel fresh.

Fett, Bossk, and Valance’s motivations are clear as they drop everything to find lash. Bobba Fett put off delivering Han Solo to Jabba the Hutt. That’s how bad he wants to kill lash. Doctor Aphra has a nice cameo where she stirs the pot and gets things going. The job where Lash betrayed his colleagues felt like a heist movie in space. Sacks added some mystery that rested on the shoulders of Villanelli to deliver. The thing that angered Lash to the point where he ruined the job occurred off-page.

It’s the ultimate tease because we don’t know if Lash was justified in his actions or gave in to his emotions.

The artwork in Star Wars comics tends almost to look the same. It’s okay, sometimes great, but it never veers too far off course. Paolo Villanelli’s artwork is bombastic with big splash pages while presenting the gritty underworld vibe. The key players are introduced grandly with name and highlight-reel style action.

Oh, and you can never go wrong with the coloring of Lee Bermejo!

It’s hard to predict if Bounty Hunters is going to be the next home run hit for Star Wars comic books. It has promise and came out swinging with a good first installment. Villanelli’s artistic presentation and Sacks engaging narrative make something old feel new again.

However, the eventual reveal of Lash’s betrayal is going to make or break this series in the long run.