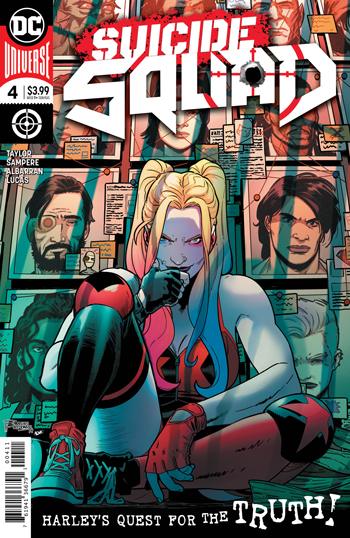 It turns out that all the Suicide Squad needed was a good writer at the helm.

Who would have thought it?  Tom Taylor has a great take on all of these characters. I am having a great time reading this month to month. I have missed the edge on this title and Taylor has brought it back.

The book opens with Captain Boomerang in a bar getting drunk.

He then recounts a story of a mission he went on with the Suicide Squad. He is barely started with the story when Boomerang is attacked at the bar by unknown assailants. It is an awesome beginning.

I wish that we held onto this beginning just a little longer.

No matter. We are instantly moved over to another storyline involving the full team.

The issue then becomes a bit about Harley Quinn at this point. It was a jarring switch but the creative team made it work pretty well.

She starts to dig  for information on her teammates. She gets closer than anyone thought possible. This leads to a hell of an ending that is rather shocking. Just when I started to get comfortable, Taylor pulled the rug out from under me.

And I completely loved that.

I don’t think that he has hit his stride yet writing this book. But he will. This is another good issue. The characters are great and it is an adrenaline rush. I have a lot of fun reading it and it is the best that the Suicide Squad has been in quite awhile.