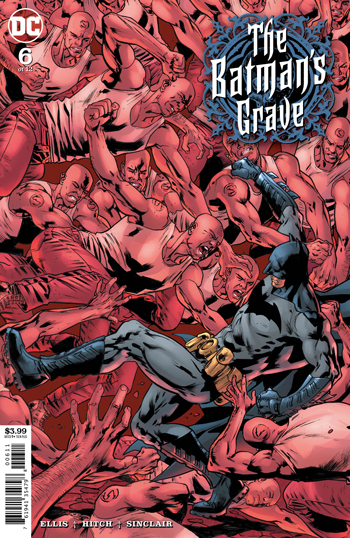 The book opens with Batman fighting his way out of a narrow corridor in Arkham Asylum.

If that’s not stressful enough, Batman also must protect Commissioner Gordon while preventing him from killing crazed attackers with his service revolver. Batman and Gordon discovered a secret army dispatched with the mission of murdering all of Gotham’s criminal justice professionals.

The implications this revelation nicely ties into Alfred’s constant plea for Bruce to provide his high-grade technology to the police instead of using it himself as Batman.

Alfred yearns for Bruce to have some semblance of a normal life before some street punk or supervillain puts the bat in an early grave.

Warren Ellis uses Alfred’s wisdom to make him come off as wise as opposed to an overbearing parent.

Bryan Hitch’s visual presentation pulls no punches. It’s almost all punches. Many artists draw great fight scenes, but there is something about Hitch’s work that made me feel the pain.

Some muscle-bound maniac slammed Batman’s head into a wall so hard that pieces of the wall flew everywhere. It looked like it hurt, and Batman on the ground in agony sold it for me. Of course, Batman replied by kicking the guy’s head through the wall, which looked even harder and more painful. The full extension of the kick, with a close up of the tread on his boot, accentuated its ferocity. I thought the guy was dead, but then again, Batman doesn’t kill, just severely incapacitates people.

Ellis’ script is engaging, but Hitch’s work stole the show here. It feels weird saying that since they work so well in tandem. It’s just another example of why The Batman’s Grave is the best Bat book going today.

Mystery, suspense, excellent detective work, and stellar art; this comic has it all.