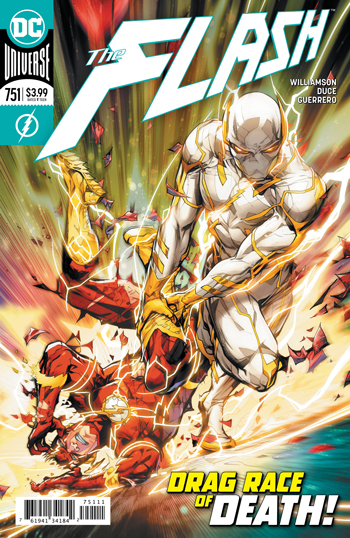 The amazing run of Joshua Williamson as writer on this title continues! It is a great time for sure. After a breathtaking 750th issue, this issue follows it up in spectacular fashion. I honestly cannot get enough of this book. It is truly something really great.

The Flash and Godspeed are fighting it out at the beginning of this issue. Godspeed is doing this at the behest of Paradox. Paradox is telling a story of how he was on the Police Force. He and the Flash crossed paths. He thought that The Flash was a miracle. But now, he is telling The Flash that he is wrong.

Barry and Godspeed go back and forth. Godspeed eventually comes to his senses. He even attacks Paradox! This makes Paradox extremely mad. He clobbers Godspeed. Then, The Flash goes to attack Paradox for this. Paradox then clobbers The Flash.

Barry still tries to fight this guy! Iris tries to help Barry but it doesn’t do much. Barry then makes his stand.  Paradox blasts him and sends him somewhere in the time stream. Paradox then grabs Godspeed and tells him that he is lucky that he needs him alive. Things are looking really bad for the gang.

At the end of the issue, we get to see where Paradox has sent Barry. That is when we get a crazy appearance from a character that I never thought we we see again.

That is the cliffhanger Williamson leaves us off on. It is pretty spectacular.

What happens next? I have no idea.

For now, this is a well written issue with some excellent art from Christian Duce. You can’t ask for more than that. Great job.