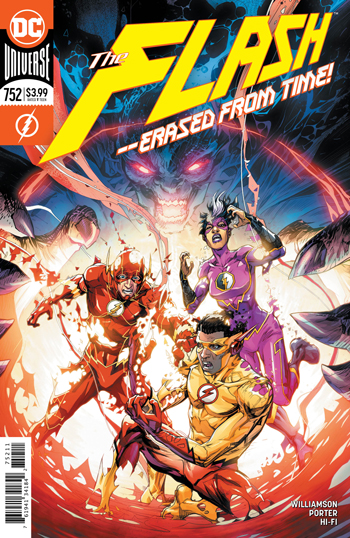 Since the landmark 750th issue came out, this book has been cooking, even more than usual.

Joshua Williamson really has an amazing plan for this comic and it shows on each and every page.

This is going to end up being a classic run on this character. It really is that good!

Paradox is holding Godspeed up at the beginning of the issue.

While Godspeed is seemingly triumphant, Barry appears in a new place entirely. And his mother is there.

This turns out to be a brilliant storytelling move. It starts off wonderfully. Barry and his mother talk and it is seemingly wonderful.

It then gets dark quick. Paradox seems to be responsible for Barry’s pain here and it is pretty terrifying to read and witness it.

Barry tries to break free. He has a hard time doing so. He is stuck in a bad place. So he forms a plan. He has to find Eobard Thawne. And so Barry goes to a Flashpoint that he knows where Thawne will be: The day he killed Barry’s mother.

Man, what a cliffhanger to end the issue on!

Williamson writes another tremendous issue here, and it is a stunner. The art by Howard Porter is simply awesome. This is a fantastic issue and it is leading to some really amazing things that are ahead.