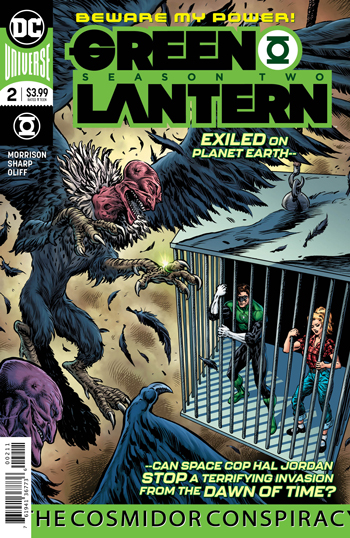 Got a secret mission to roust out a bad alien, currently hiding out on his home planet.

But until the villain reveals himself, Hal’s got some down-time. Just enough to look into a mystery for an old friend, Eve Doremus, and her father, the architect mastermind of America’s newest, not-so-magical theme park.

Which is currently being sabotaged by a race of ancient, conquering bird-men from the bowels of the Earth.

Looks like Grant Morrison is determined to prove that the truly bizarre isn’t simply the province of outer space when it comes to the life of a Green Lantern. Grounded on Earth or not.

And when I say bizarre, think of a megalithic modern urban hell-scape of anxiety and alienation, where high-pitched whistles scramble the brain, and possessed demon masks turn their wearers into zombie slaves, who toil to renew the conquering legacy of a xenophobic mad-(bird)man, when they’re not being kept isolated and powerless in a maze of deep underground cages.

Huh. Maybe not such a bizarre scenario after all.

But it sure looks that way, courtesy of the at-times alarming depictions of Liam Sharpe. And with all the nonsense being spewed in the dialogue, as Morrison takes full advantage of a cast that can’t seem to get their heads to work right. It’s weird all right.

Leave it to Hal, with a little assist from his ring, to cut through the chaos.

And just in time, too. Because there’s still work to do. And this time, the culprit, is most definitely a different brand of off-world alien.

Next Issue: Time to dust off that old bomber jacket, Hal. (And maybe the aviator glasses, too.)