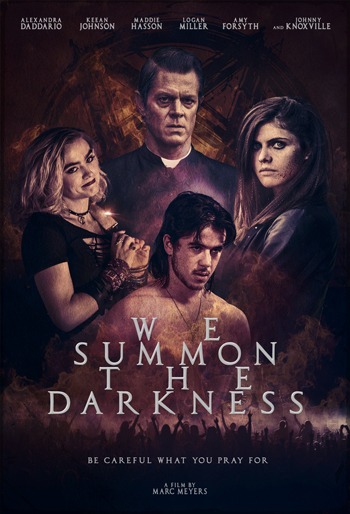 Three comely damsels, scantily clad and ready to party, head to a heavy metal show. It’s 1988 Indiana, and apparently there have some ritualistic murders that have raised deep fears of satanic worshippers among the Christian faithful.

Undaunted, the gals meet three guys at the show. The six hit it off (despite the dudes’ sporting of pentagram jewelry and the like) and Alexis (Daddario) invites the guys back to her dad’s place, an isolated mansion, for some more partying.

Once there, the gang hangs out in the spacious backyard. The booze flows, and they decide to play a game of “Never Have I Ever”.

I don’t want to reveal much more, but things turn a bit ugly.

I was pleasantly surprised by this one, as it hasn’t been very well-received overall, with one reviewer wondering why anyone would sign on for such dreck.

I’ve seen a LOT of horror movies, and this is far from dreck. Flawed? Sure.

It takes too long to get to the house, there are one or two motivational moments that are somewhat questionable.

Also, there are some dodgy CGI effects (the practical effects and makeup are solid, however).

But once we arrive at the house, We Summon The Darkness is an energetic, gory and clever variation on “Satanic Panic” stories.

Daddario is an actress I’ve liked before (and she has one of the most striking pairs of eyes since Meg Foster) and she is obviously relishing this part (she also served as a producer).

Luckily, all of the performances are good, including Knoxville in a glorified cameo, which he effectively underplays.

Some of the reveals are far from shocking, but I’m not sure that the intention of the film was to make the audience gasp at these moments.

I think everyone involved wanted to make an entertaining, suspenseful lark with protagonists we actually root for.

Oh, and bonus points for the song choice over the end credits. Historically accurate, and a personal favorite from that era.

Likely not going to rock anybody’s world to its core, but We Summon The Darkness is far better than I’d heard. Give it a shot on a slow night.

We Summon The Darkness arrives
On Demand and via Digital HD on April 10, 2020.