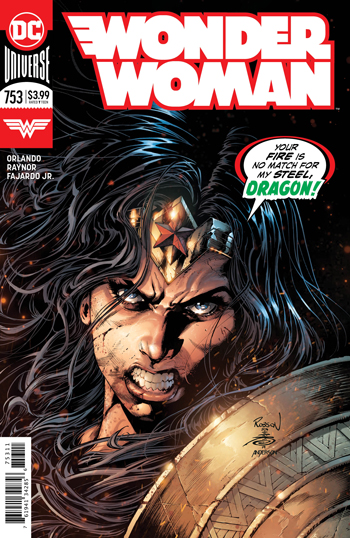 “There was no simple answer. I made a choice to return peace to Boston as quickly as possible… A decision I would make again.”
Worthy intentions, Diana.

But that’s little comfort for your chaperone from the Boston P.D., Detective Nunes, once it becomes clear that your brand of superhero vigilante justice has deprived her of the prime suspect in her murder case.

It’s a tension that author Steve Orlando has not-so-subtlety been building from the start – just how well Wonder Woman’s presence in her new hometown of Boston, suits the local authorities.

That dynamic has been getting more attention than most DC superheroes generally have to deal with, suggesting a building plotline that may easily go full sideways for the fiery detective in upcoming issues.

That doesn’t bode well with all the loaded foreshadowing being dropped by Warmaster Paula von Gunther as she goes about collecting her Four Horsewomen in the mad quest to destroy Wonder Woman once and for all.

This month that recruitment brings aboard the new Armageddon, the tragically altered granddaughter of DC’s original Armegeddon – a swastika-bearing Nazi super-soldier, and once-upon-a-time foe of Wonder Woman’s early career.

So that’s Devastation and Armageddon. Who’s next up? Apparently, and appropriately, that honor will go to the newest iteration of Genocide, who once inhabited the dead body of Diana’s future corpse, and now rests… elsewhere? Don’t worry, we’ll find out just where soon enough.

And that leaves… just one more. And pretty clearly, we are being prepared for Warmaster’s final Horsewoman to have a tragic origin of her own, given the connection she apparently shares already with Princess Diana.

Is that fourth recruit then going to be Valda? Maybe. Or perhaps an as-yet discovered super-powered version of Detective Nunes? …Possibly. It’s a little hard to say yet. But it certainly could be, given the strain building between the two women.

Though by my count, in this run so far, there’s at least three other very possible candidates to be concerned about. Which could come in handy mind you, if Wonder Woman ever has to do some recruiting of her own

So, don’t assume anything yet. We’re just going to have to wait another issue or two, to see just what Warmaster knows that we don’t.

In the meantime, this issue, courtesy of Orlando and the flamboyant pencils of Max Raynor, gives us plenty of super-heroic action, as Wonder Woman and the mysterious female knight Valda take the fight to that giant, Quantum Metal-covered minotaur beast currently rampaging through Vermont.

It’s a gloriously absurd bit of comic book fantasy. And Orlando keeps it that way, by holding strictly to the action. I mean, there’s bound to be a rationale why Valda and her chromium beast have both been transported from medieval Europe, to 21st century New England. Maybe it even all ties together.

But for now, it’s just another wild, brightly colored mystery of the DC universe.

Next Issue: Yet another powerhouse Princess from Wonder Woman’s past…