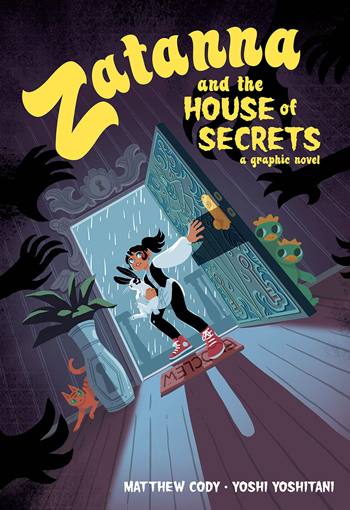 Zatanna and the House of Secrets was a treat and another great addition to the series of young adult graphic novels written to introduce kids and pre-teens to the DC Universe and their multidimensional pantheon of heroes.

I have been thoroughly enjoying these books and have been looking forward to reading this since I heard of its upcoming release. As a once avid reader of comic books that has slowly, as of late, not read as many as he had in the past I have found these books a nice substitute and a treat to read in the interim.

This one focuses on, you guessed it. Zatanna.

She and her father Zatara live in The House of Secrets where he is now the caretaker.

Zatanna is a normal everyday kid whose father just happened to be the most powerful magician in the world; only, Zatanna thinks he is just a common street and party magician.

When she is asked by her father to care for his stage rabbit, Pocus, one night, she, like all good teenagers decides it is a good idea to go to the school dance.

With Pocus in her backpack she heads out to the dance on the stormy night. There, Zatanna meets Klarion the Witch boy. He seems nice enough until the power goes out and he steals the magic key around Pocus’ neck. Zatanna returns home to discover that the Witch Queen has infiltrated their home. She now holds the key and the house has gone haywire. Up is down, left is right and everything looks like an M.C. Escher illustration.

Without the key in their possession, The House of Secrets now has revealed its true form. Zatanna must battle both the Witch Queen, Klarion, and her own self doubt to stop the Witch Queen from unlocking the hidden secrets of the House thus becoming the most powerful evil witch in the universe.

Like I stated earlier, I really like these books. They are fun, and they are well written. They remind me of the light hearted fun that comic books used to be when I was a kid. The writer, this time, Matthew Cody of the Supers of Noble’s Green trilogy has woven an exciting and entertaining tale of both Zatanna coming of age and learning who she is with a thrilling mystery adventure. The artwork by illustrator Yoshi Yoshitani combines to make a dynamic and page turning book.

If you have kids who like to read I recommend this series of DC YA graphic novels. They are such a little gem of a collection. I have yet to read one that I didn’t like.

Zatanna is one of my favorite characters in the DC Universe and this is a wonderful treatment of her legacy. Even if you are an adult and have been reading comics your whole life or if you are a first time reader of comics these books are a nice break from the serious and sometimes overbearing nature of the current day comic book.

Sometimes it is nice to stop and slow down.

These books are just that, for me. A breather from the wear and tear of the manic race of life.