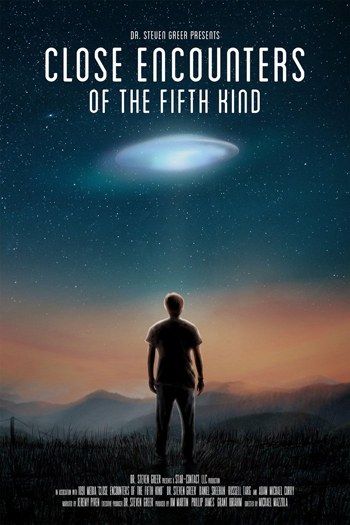 As an avowed The X-Files fan – and for other reasons, of course – I’ve been longtime fascinated with the possibility of life beyond our planet. Even had one of the iconic I WANT TO BELIEVE posters on my apartment hallway wall while living with my ex back east.

This and my conspiracy-theory interest (I rarely fully believe them but find them fascinating, to a point) made this new doc about Dr. Steven Greer and his proclamations that we have already made contact with E.T.s – and the government’s hiding of said contact – fascinating to me.

This is the third doc about Greer and his theories.

I’ve not seen the other two, but didn’t feel I missed out, as the film does a good job summarizing his life and theories.

Jeremy Piven soberly narrates this journey through government coverup, faked abductions, and so much more.

What makes this film impressive is how fast-paced and easy to understand it is.

There is talk, for example, of how interstellar travel by beings billions of evolutionary years beyond us is accomplished by consciousness.

The speed of light is way too slow for this kind of travel, and the way it is (supposedly) done is spelled out in a concise, interesting, and uncondescending way.

It’s at times similar to how Goldblum explains chaos theory in Jurassic Park.

I appreciated this, even if I watched the whole thing with a smile AND a jaundiced eye.

There are many points, videos and interviews that truly do an excellent job of giving the ideas the veneer of possibility.

Did the film convince me of its theories (FACTS??) it posits? Not necessarily.

But I sure did enjoy watching it try.

However, two demerit points for the dumb montage of evil alien films (set to the tune of “Why Can’t We Be Friends”), which suggest Hollywood has CIA moles that are making certain major TV series and films primarily focus on aliens that are antagonistic. Um, gimme a friggin break…

Close Encounters of the Fifth Kind is available to purchase digitally
on April 7th and available to rent on April 21st.