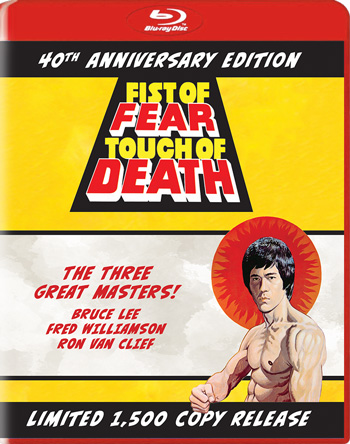 When I was in my early teens, I watched a lot of martial arts flicks with friends of mine who were either taking martial arts themselves or were major action fans (or both).

Most of these were horribly dubbed (in terms of both timing and vocal performance) and quite silly, but we enjoyed watching them (usually on Saturday afternoons) all the same.

I saw a slew of Bruce Lee ripoffs (Bruce Li, Bronson Lee, etc) well before I saw my first movie that actually starred Lee, so I have a bit of a soft spot for these films (on that note, the thing I’m most excited about regarding the upcoming Bruce Lee collection from Criterion is Game of Death II on Blu-ray!!).

Soft spots only go so far.

I’d never seen (or even heard of) the Bruce Lee cash-in Fist of Fear, Touch of Death until very recently. I suppose that is with good reason, as it’s a mostly terrible film, but there are aspects of it which should yield some appeal to fans.

The film is mostly a (colossally unconvincing) mockumentary, with our intrepid reporter, Adolph Caesar (yes, the esteemed actor who was nominated for an Oscar for A Soldier’s Story and had a small role in The Color Purple) covering the 1979 Martial Arts Championship at Madison Square Garden.

Part of the goal of the event is to find the “successor” to Bruce Lee, the all-time martial arts master.

Along the way, Caesar interviews other fighters/celebs/badasses, most notably Fred Williamson (whose presence alone should have made this film more well-known), Ron Van Clief, Teruyuki Higa and more.

There’s an embarrassing scene where Caesar invites us to watch an interview he conducted with Bruce Lee years before. The two are obviously not even in the same room, with the added surreal touch of Lee being dubbed in an effete voice that is absolutely ludicrous.

There’s a hilariously bad sequence wherein Caesar asks someone off camera if we might have time to watch how Williamson almost didn’t make it to the tournament on time.

We then cut to Williamson in bed with a woman who complains that they only made love five times the night before. Despite the time crunch, Williamson of course obliges her with a sixth go-round.

He then rushes out the door and gets into a fight with a nebbish (played by Ron Harvey, the film’s screenwriter) before being picked up by Caesar in a Rolls.

The two chat for a bit, then we are treated to endless drive-by shots of NYC circa 1979 which, while kind of boring, do serve as a time capsule of that place and time.

Caesar is (mostly) able to keep his dignity throughout. Having that rich voice doesn’t hurt (there’s a reason he was the narrator on so many cool trailers in the seventies, including Blacula and Dawn of The Dead).

The biggest bummer of this film is the silly notion of showing us Lee’s “backstory”, as told through clips from a dull family drama Lee appeared in before he was famous and another awful samurai film.

This section takes up 30 or so minutes and brings the whole silly affair to a crashing halt. I get the Roger Corman-style approach to Frankensteining different films into a feature-length product, but try to punch it up a bit, gang.

It must be said that The Film Detective has done a nice job restoring this mess for its 40th anniversary. And extra points for the making-of doc, That’s Bruceploitation, which is far more entertaining than the main feature.