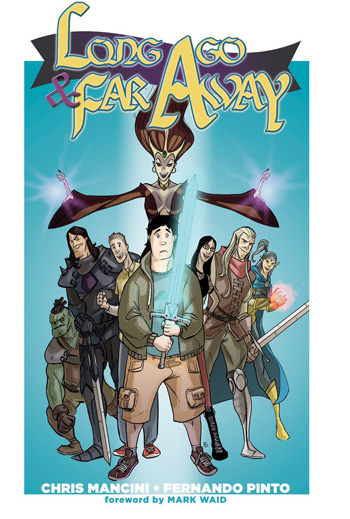 This is a book that was produced initially by a Kickstarter page and eventually it got picked up by Dan Harmon’s company, Starburns Industries.

It’s easy to see why. This book is funny and enjoyable and has a bunch of adventure. It’s also highly original which is something that we don’t see enough of. I found myself liking it instantly from the first few pages of the first issue.

The comic starts off with a tale of a mystical land.

Then, it cuts over to a comic book store where we see Jason. Jason is telling the story of this mystical land. He is telling his fellow employees all about the world of Elvenwood. He is telling people how he saved it from the Witch Queen Nexis as the Child Knight. He paints himself a legendary hero.

Needless to say, nobody believes him. His employees mock him. And he is stuck at a dead end job at the comic book store. He is settled into his disappointing life.

It isn’t long, however, until Elvenwood needs their champion again.

Neela and Ryan and come to Earth from Elvenwood.

They need to recruit their former champion. 200 years have passed in Elvenwood. Only 17 years have changed on Earth. The Witch Queen is wrecking havoc all over the Elvenwood land. And Jason needs to get over there to stop her and be the hero he once was again.

Chris Mancini writes a highly enjoyable series. Jason keeps refusing the call of being a hero throughout the series. It strangely reminded me a bit of Matt Wagner’s Mage but for the millennial generation. The humor and character development is handled much differently, (as is the story) but it’s the closest thing I could relate it to.

The art by Fernando Pinto is a little cartoony, but he tells the story well. I have never seen his work before but there is something about it that I instantly liked. He’s got a great future ahead of him.

This book is a wonderful little gem. It just grabs you and takes you on an unexpected, wild adventure. The creative team makes the whole thing work perfectly. I hope they work together on other projects beyond this in times to come.