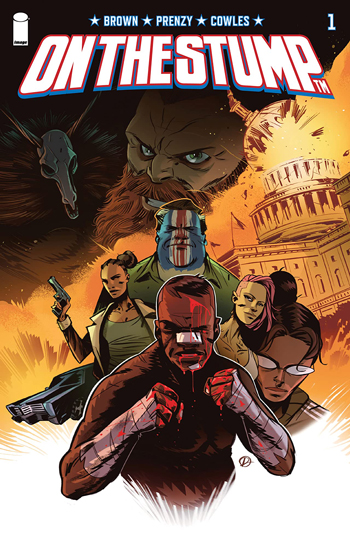 When I first saw the title of this book, I thought that it was rather unfortunate. However, once I started reading this, I really dug the concept of this book. It is wildly inventive comic that also had a bit of political satire to it as well.

The world that exists in this book has a very different class system going on here. Elections are decided in this world by highly publicized hand to hand combat in these arenas called the Stumps. The violence doesn’t end in the ring either as powerful people are doing assassinations and getting away with it.

From this we are introduced to Senator Jack Hammer and FBI Agent Anna Bell Lister. The first issue is dedicated to getting to know the characters and the various quirks of the world.

The book has a bunch of quirky characters in it. They are all very interesting.

The issue starts off with Jack in the middle of one of the aforementioned fights, in which he has to fight a Californian lawmaker named Senator Sweet Smell Shaw. They are fighting over a bill. It is pretty insane.

Eventually, Hammer and Lister meet and  join forces. Together, they have decided to go against the corruption and take all of the bad people down. They may indeed have their work cut out for them, however.

The story is fun and a bit heavy handed. The art is pretty good.

Overall, this is a nice first issue. There is something for everyone here. It is definitely something I’ll be checking out month to month.