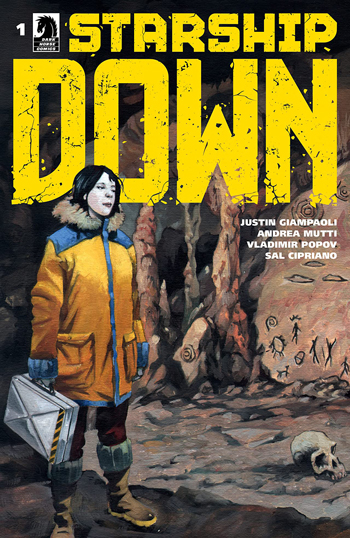 This is a new series from those fine folks over at Dark Horse Comics. It is part high concept sci-fi mixed with part political thriller. It is a pretty good debut issue as well and it is definitely worth checking out.

This could end up being a sleeper.

The book follows anthropologist Jocelyn Young and her exploits.  At the beginning of the book, she is in a helicopter in Siberia. Apparently, an extraterrestrial spaceship has been discovered deep in the ice.

Young meets up with the ground crew and gets an assessment of the situation. We get to meet a bunch of weird and wacky characters. Writer Justin Giampaoli does a great job of giving us a nice mix of personalities here.

They go down and get a good look at the ship. They also come across a cardinal who has taken an interest in the ship. Things get a bit crazy. It all leads to one hell of a discovery and a cliffhanger that has to be seen to be believed.

This whole comic is well done. The art is some of the best work of Andrea Mutti’s career. This is a nice start to the series and it is very exciting. I am certainly interested with where they will take it from here.