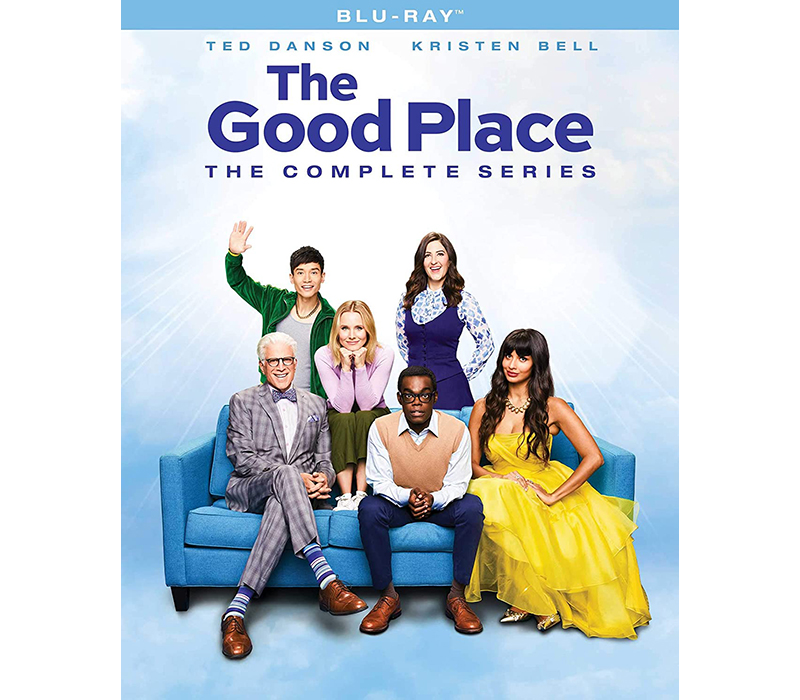 Welcome! Everything is fine. The complete series of the fan-favorite comedy hit The Good Place  makes its Blu-ray debut on May 19, 2020, courtesy Shout! Factory. All 53 episodes from the NBC series will come to Blu-ray in a 9-disc set, complete with bonus features including the series finale after show and extended episodes, with footage not seen on television.
What happens when we die? It’s a question everyone has asked, since the beginning of time. But when Eleanor Shellstrop (Kristen Bell, Veronica Mars) dies tragically, she finds out that the afterlife is amazing: full of frozen yogurt, soulmates, and wonderful people who have done incredible things with their lives.
It is absolutely perfect. The only problem is Eleanor herself. She isn’t supposed to be in The Good Place.
In fact, her life decisions wouldn’t have gotten her even close. But due to a clerical error, she’s been given someone else’s reward and now has to struggle with being good in order to make sure her secret isn’t discovered.
From Michael Schur, executive producer of Brooklyn Nine-Nine and Parks And Recreation, comes the hilarious complete series of this refreshingly original comedy co-starring Ted Danson (Cheers) in an Emmy Award-nominated performance, D’Arcy Carden (HBO’s Barry), William Jackson Harper, Jameela Jamil and Manny Jacinto.
Bonus Features: