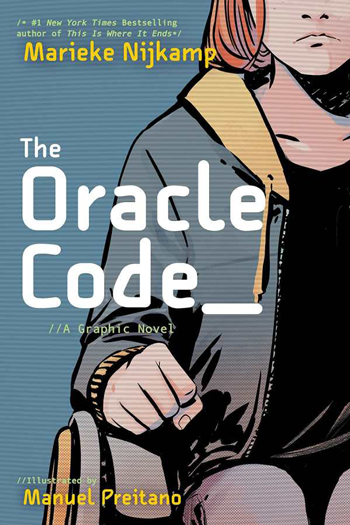 These DC Ink books have been pretty damn impressive. All of the stories have been fresh takes on the DC Universe. They are aimed for a younger audience, but they are able to be enjoyed by adults as well. They also don’t talk down to the younger audience which make them even more enjoyable as well.

The opening scene has Barbara Gordon sitting with a friend on a rooftop talking. They are talking about computer hacking and some other things.

Then, they hear and see a bunch of police cars go flying by. The two decide to follow them. This leads to Barbara getting shot and losing the use of her legs.

From there we cut to six weeks later.

Barbara is taken by her father, Commissioner Gordon, to the Arkham Center for Independence.

This is where Gotham’s teens go under rehabilitation. She meets Dr. Harlan Maxwell there. He shows the Commissioner and Barbara around.

The Commissioner and Barbara have a heart to heart. Then, Barbara is left in the facility. She immediately hates it there. She does meet some of the fellow patients. She immediately becomes at odds with Dr. Maxwell. Things are tense for her. And that is all before the strange sounds start happening.

Patients go missing. Barbara starts to realize that she may be the only one able to do something about it.  So, she decides to try and figure out just what is going on in this rehabilitation center and who might be responsible.

And it is a completely involving story.

By the end of the book, Barbara gets what she needs but not in an expected way. The writing is excellent and taut. The art is pretty damn good as well. This is another excellent graphic novel from DC Ink. Well done again.