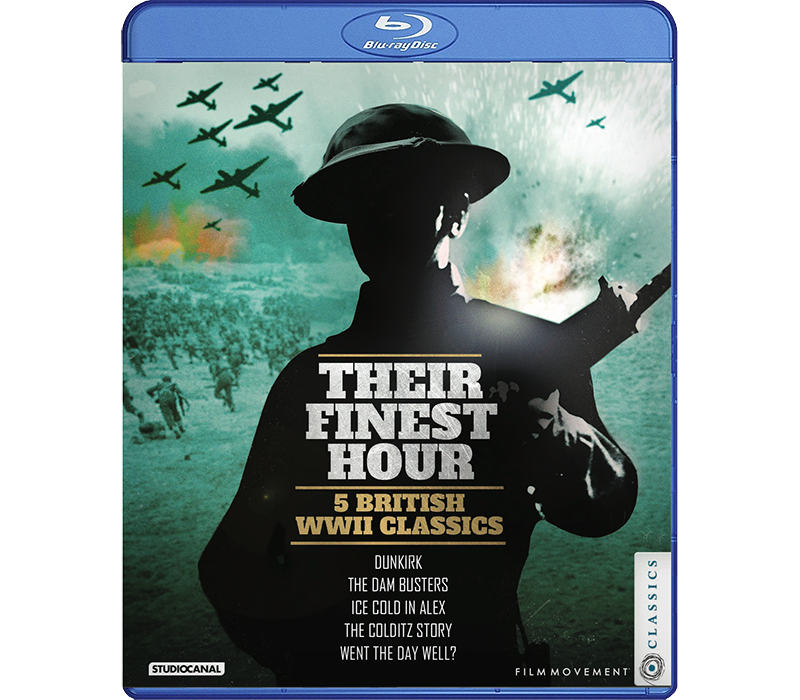 THEIR FINEST HOUR: 5 BRITISH WWII CLASSICS brings together some of the most celebrated British war films, digitally restored and available for the very first time on Blu-ray. Titles include the Ealing Studios-produced, Graham Greene adaptation WENT THE DAY WELL? (1942) along with Michael Anderson’s Oscar-nominated THE DAM BUSTERS (1955), as well as three box-office hits starring John Mills – THE COLDITZ STORY (1955), DUNKIRK (1958) and ICE COLD IN ALEX (1958).

Based on a story by Graham Greene and directed by Alberto Cavalcanti. Bramley End, snug and safe, seemed far away from the perils of World War II. Little did the villagers suspect the grim events that would arrive at their doorsteps. Surprised by the lorry loads of Royal Engineers that rolled onto their village green, they had no reason to believe that these soldiers were disguised German paratroopers, and even less reason to be suspicious of Oliver Wilsford (Leslie Banks), their trusted town squire. A.O. Scott of The New York Times, said this Ealing Studios wartime production “contemplates some pretty grim stuff, but with equipoise, discipline and a sense of humor that embody exactly the virtues it sets out to defend. Apart from its considerable historical interest, this is a movie about how civilization survives.”

The Nazis believed that no man could break out of Colditz Castle. A medieval fortress located in the heart of Saxony and situated 400 miles from any neutral frontier, it was the prison where the most contentious Allied POWs were held. Determined to find a way out, a British officer (John Mills) hatches a plan to navigate the castle’s subterranean tunnels towards freedom. Based on the best-selling book by actual Colditz escapee Major Pat Reid and brought to screen by four-time James Bond director Guy Hamilton. Nominated for a “Best Film” BAFTA Awards, THE COLDITZ STORY was called “Easily one of the best prisoner-of-war yarns to come from any British studio” (Variety).

Based on actual events. Convinced that the war can be shortened by attacking the German industrial nerve center, Dr. Barnes N. Wallis (Michael Redgrave) develops a “bouncing bomb” that can be used to destroy the Ruhr dams. Facing seemingly impossible odds, the 617 Squadron, led by Air Ace Wing Commander Guy Gibson (Richard Todd), is then tasked with carrying out the dangerous night raids to complete the mission. Adapted by R.C. Sherriff from the book by Paul Brickhill and featuring innovative special effects photography by Gilbert Taylor (cinematographer of Star Wars: A New Hope), The Dam Busters would become a major influence on George Lucas in his storyboarding and filming of the Death Star attack sequence. James Dennis of Screen Anarchy called the film “a triumph of British ingenuity [that] served to highlight the best of the war effort in a wonderfully celebratory fashion.” Nominated for a Special Effects Oscar, as well as Best Film, Best British Film and Best British Screenplay at the BAFTA Awards, THE DAM BUSTERS was directed by Michael Anderson.

It is early May 1940. London is lulled into an atmosphere of false security, but war correspondent Charles Foreman (Bernard Lee) knows better. As the Battle of France takes a turn for the worse, he joins the Merchant Navy and volunteers for Operation Dynamo, the greatest rescue mission ever mounted. John Mills and Richard Attenborough star in this Leslie Norman-directedfirst cinematic retelling of the 1940 evacuation of Dunkirk, produced by Ealing Studios. James McAllister of The London Economic said, “Those who thought Christopher Nolan’s shattering summer spectacle could have benefitted from greater historical context, need look no further than [this] epic wartime classic.”

The year is 1942. Along the barren North African coast where war has turned towns into smoking ruins, Captain Anson (John Mills), a commanding officer in the Royal Army Service Corps, is tired and thirsty. Separated from his unit while evacuating to Alexandria in a military ambulance, he takes on several passengers but soon realizes that one of them may be a German spy. Nominated for four BAFTA Awards and winner of the FIPRESCI Prize at the 1958 Berlin International Film Festival. Lou Thomas of the British Film Institute says, “Sixty years after its release, director J. Lee Thompson’s desert epic still stands up as an essential war film.”

And we’re giving away 3 boxsets of THEIR FINEST HOUR: 5 BRITISH WWII CLASSICS to Forces of Geek readers!

To enter, send an email with the subject header “Their Finest Hour” to geekcontest @ gmail dot com and answer the following question:

What is your favorite WWII movie?