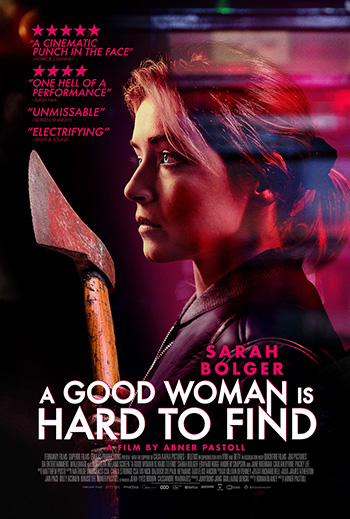 To make matters even more trying, her late husband was murdered right in front of her son’s eyes, shocking the poor boy so badly he hasn’t spoken a word since.

Into this already stressful environment crashes Tito, a low-level drug dealer who forces his way into their home in order to stash some drugs he just ripped off from a local criminal bigwig.

The film seems to be setting itself up as another home invasion feature (albeit a good one) but then it takes a surprising turn.

In several ways, A Good Woman is Hard To Find reminded me of Danny Boyle’s debut, Shallow Grave, with similarly grisly scenes and ruthless local thugs. But I think A Good Woman is far and away the superior film.

One of the main reasons is that the lead is quite likable. We feel for Sarah in her terrible situation, and the performance by Sarah Bolger is nearly perfect. Also, while clearly beautiful, the bags under her eyes and haunted look are befitting her character without Bolger or the makeup team overdoing it.

The twists and turns are utterly enjoyable as well. This isn’t a film with colossal revelations or head-slapping surprises, but it kept me on my toes throughout.

The climax has just the right amount of suspense, grisliness and fun, and the coda is satisfying and well-earned.

The direction and editing, both by Abner Pastoll, are deft and sure-footed, and at times quite witty.

It’s a nice balance between kitchen-sink drama and highly stylized crime picture. The over-the-top, killer score by Matthew Pusti is the icing on the cake.

This comes highly recommended to those who can stomach the violence. It’s a real treat for crime thriller fans.

A Good Woman is Hard To Find is available on May 8th, via
On Demand, Digital HD, & on Film Movement’s VIRTUAL CINEMA.