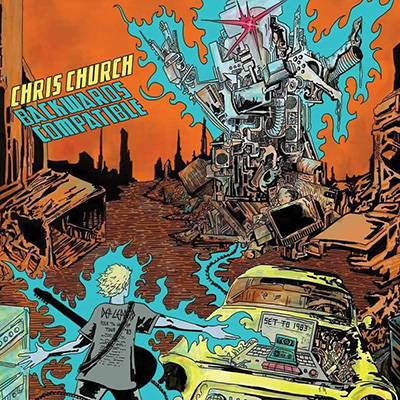 There are hooks galore on BACKWARDS COMPATIBLE.

You’ll also find great harmonies, too. Oh, and some handclaps. If you listen closely, you’ll also find some nice keyboard noodling as well. And you can’t forget the wall of chunky guitars.

These beastly drums on the album practically control your heartbeat – when they stop, it feels like everything around you comes to a grinding halt.

Finally, I know I mentioned the hooks, but I have to bring them up again – they soar, the pirouette, they dive, and they rattle your brain…

Simply put, this is a great Rock ‘n’ Roll album with enough melodies to fool you into thinking it is Power Pop. Calling it Power Pop may bring the album to the attention of fans of the genre – which is always a good thing – but by filing it under one genre, you alienate the people who don’t know what Power Pop is (92% of the world’s population, give or take).

Egad, you might even turn off the folks who don’t like Power Pop at all, which means that they will never give this album a spin. And you don’t want them to miss out on this collection of grandiose, melodic Rock songs that will most likely make a lot of Top Ten lists this year. And yeah, more than likely, it will appear on many Power Pop Top Ten lists, too. Which isn’t bad, I suppose. I just think it deserves to be embraced and loved by Rock fans in general.

“Dumb It Up” brings the power, melody, and Rock crunch. “Begin Again” has ‘70s Rock undertones mixed with fantastic harmonies and hooks yet it has layers of emotional power. “No Letting Go” is an AOR rocker that would fit rather comfortably on FM radio (and those solos are definitely Hard Rock influenced. There I go, mentioning guitar solos again). “What R U” is another heavy gem that showcases Church’s ability to step out of one genre and embrace a few at the same time. You can almost hear The Beatles, The Babys, and ELO buried in that wall of chunky guitars. While you may get excited when you see there there’s a song on the album called “Pop Dreams,” don’t be surprised if you hear something MORE than Power Pop – it has a ‘90s Rock crunch mixed with a delicious hook.

Again, it transcends a certain genre that I’ve already mentioned once too often. In fact, the album, as a whole, incorporates a multitude of genres and moods.

OK, you can call BACKWARDS COMPATIBLE a Power Pop album if you feel so inclined. It is most certainly Pop. And there’s no denying the magnificent power that leaps out of your speakers. I just don’t feel comfortable painting it one color when it is actually much more than that – it is a sonic Pop rainbow of sound.

Yeah, that’s what I’ll file it under: Sonic Pop Rainbow Of Sound.

Whatever you do, prepare for the Pop crunch – it is not just for breakfast anymore.