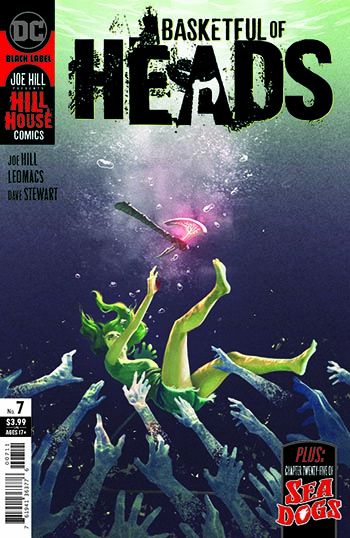 In many ways, Hill couldn’t have asked for more in terms of success for Basketful, which has garnered critical acclaim and even an extra issue. Dave Stewart is brought on for the finale and provided an excellent visual motif with his coloring.

All questions are answered, and everything is wrapped up quite nicely.

June Branch has been through hell and back. She escaped what appeared to be certain death, ensured Chief Clausen got his just deserts and reunited with her boyfriend, Liam. One big question was if Liam was an undercover F.B.I. Agent.

All the evidence pointed to that direction, and it turned out to be a big misdirect.

However, what is revealed about Liam is heartbreaking for June. Hill excellently executed this moment as the reveal on its own is bad enough. Liam made it worse with each word that came out of his mouth while he tried to justify his actions.

What June did next was surprising. It simultaneously felt deserved, and too much.

Later on, June met up with a character that was absent from the series after the first issue. This individual is revealed as the F.B.I. informant and the questions to whether June went too far or not with Liam are answered as Hill connected the dots that filled in the remaining gaps.

I’m not going to spoil it here because while Liam didn’t do anything to June, she was dealt an incredibly bad hand from the moment she stepped foot on Brody Island.

To say this was a fun series would be an understatement. I would always forget that Basketful was in my pull list, yet, every issue got better with each turn of the page. Some of the mystery elements were obvious, while others kept me guessing. Throughout all of the murder, magic, and corruption, June is a worthwhile protagonist that made her harrowing journey an engaging one. Hill made the reader feel as worn down as June most of the time, while Leomacs’ visual presentation stole the show more often than not.