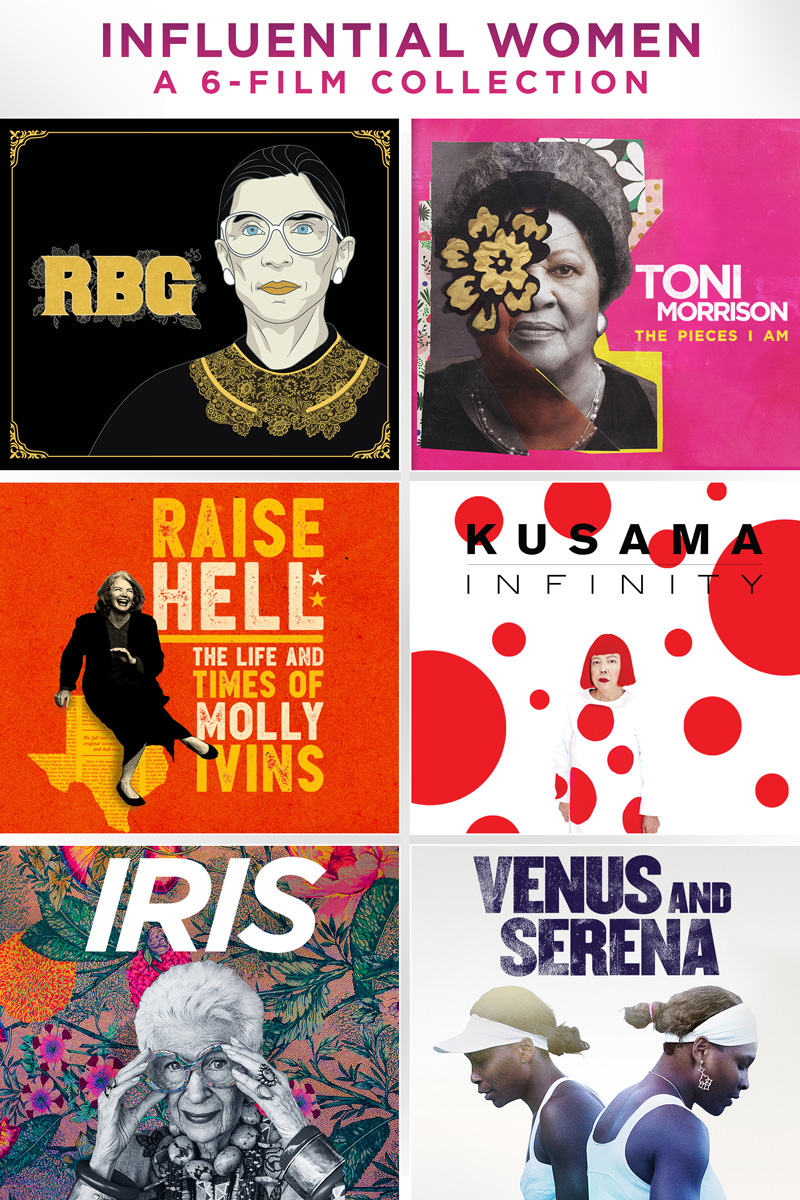 The Mother’s Day bundle will feature a collection of six documentaries – RBG, an inspiring documentary on the life and career of the U.S. Supreme Court Justice Ruth Bader Ginsburg, Toni Morrison: The Pieces I Am, a cherished look at the life of pioneering author, activist and Nobel Prize winner and her literary legacy, Raise Hell: The Life and Times of Molly Ivins, a film highlighting trailblazing career of political columnist and media firebrand, Kusama: Infinity, following prominent artist Yayoi Kusama’s journey from a conservative upbringing in Japan to her brush with fame in America during the 1960s, IRIS, a film following the quick-witted 93-year-old fashionista Iris Apfel, directed by legendary 87-year-old documentarian Albert Maysle, and Venus and Serena, a look into the lives of professional tennis players, the Williams sisters.

IRIS pairs legendary 87-year-old documentarian Albert Maysles with Iris Apfel, the quick-witted, flamboyantly dressed 93-year-old style maven who has had an outsized presence on the New York fashion scene for decades. More than a fashion film, the documentary is a story about creativity and how, even in Iris’ dotage, a soaring free spirit continues to inspire. IRIS portrays a singular woman whose enthusiasm for fashion, art and people are life’s sustenance and reminds us that dressing, and indeed life, is nothing but an experiment. Despite the abundance of glamour in her current life, she continues to embrace the values and work ethic established during a middle-class Queens upbringing during the Great Depression. “I feel lucky to be working. If you’re lucky enough to do something you love, everything else follows.”

Now the top-selling female artist in the world, Yayoi Kusama overcame impossible odds to bring her radical artistic vision to the world stage. For decades, her work pushed boundaries that often alienated her from both her peers and those in power in the art world. Kusama was an underdog with everything stacked against her: the trauma of growing up in Japan during World War II, life in a dysfunctional family that discouraged her creative ambitions, sexism and racism in the art establishment, mental illness in a culture where that was particularly shameful and even continuing to pursue and be devoted to her art full time on the cusp of her 90s. In spite of it all, Kusama has endured and has created a legacy of artwork that spans the disciplines of painting, sculpture, installation art, performance art, poetry and literary fiction. After working as an artist for over six decades, people around the globe are experiencing her installation Infinity Mirrored Rooms in record numbers, as Kusama continues to create new work every day.

Raise Hell: The Life and Times of Molly Ivins

Raise Hell: The Life and Times of Molly Ivins tells the story of media firebrand Molly Ivins, six feet of Texas trouble who took on the Good Old Boy corruption wherever she found it. Her razor sharp wit left both sides of the aisle laughing, and craving ink in her columns. She knew the Bill of Rights was in peril, and said “Polarizing people is a good way to win an election and a good way to wreck a country.” Molly’s words have proved prescient. Now it’s up to us to raise hell!

At the age of 85, U.S. Supreme Court Justice Ruth Bader Ginsburg has developed a lengthy legal legacy while becoming an unexpected pop culture icon. But the unique personal journey of her rise to the nation’s highest court has been largely unknown, even to some of her biggest fans – until now. RBG explores Ginsburg’s life and career.

Toni Morrison: The Pieces I Am

An artful and intimate meditation on the life and works of the legendary storyteller and Nobel prize-winner. From her childhood in the steel town of Lorain, Ohio, to ʼ70s-era book tours with Muhammad Ali, from the front lines with Angela Davis to her own riverfront writing room — Toni Morrison leads an assembly of her peers, critics and colleagues on an exploration of race, America, history and the human condition as seen through the prism of her own literature. Inspired to write because no one took a “little black girl” seriously, Morrison reflects on her lifelong deconstruction of the master narrative. Woven together with a rich collection of art, history, literature and personality, the film includes discussions about her many critically acclaimed works, including novels “The Bluest Eye,” “Sula” and “Song of Solomon,” her role as an editor of iconic African-American literature and her time teaching at Princeton University. Featuring interviews with Hilton Als, Angela Davis, Fran Lebowitz, Walter Mosley, Sonia Sanchez and Oprah Winfrey, who turned Morrison’s novel “Beloved” into a feature film.

Venus and Serena takes an unfiltered look into the remarkable lives of the greatest sister-act professional tennis has ever seen. With unprecedented access, the film tells the inspiring story of how these two women, against all odds, but with the help of visionary parents, made it to the top.

The Magnolia Home Entertainment Mother’s Day bundle
is now available to own on
VUDU, Fandango Now and XBOX for $29.99.