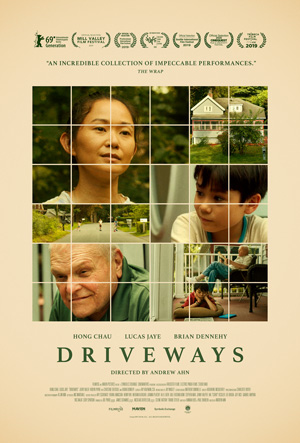 A true sleeper in the spirit of the Ned Beatty/Liev Schreiber film Spring Forward, Driveways is a lovely film about loneliness, kindness and human connection. Single mom  Kathy travels with her eight-year-old son Cody to her recently deceased sister’s home in order to clean it up (her sister was a hoarder) and put it on the market.

Cody is shy and extremely sensitive, but is immediately intrigued by his next door neighbor, Del, a widower and Korean War vet, and begins to sow the seeds for a friendship with the old man.

Del, while taciturn at first, gradually becomes open to the relationship and begins to enjoy the boy’s company.

This isn’t too surprising, as Del’s life consists of eating rudimentary meals by himself and falling asleep in front of the TV. Seemingly his only respite is playing bingo with his buddies at the local VFW.

Kathy is slightly resistant at first but begins to like and trust Del relatively quickly and becomes grateful for his positive influence on her son.

This movie touched a few nerves for me. I was raised by a hardworking, no BS mom, so I enjoyed the touching and quite believable relationship between Kathy and Cody.

Also, when I was very young, there were older people in my neighborhood as well as stores where my mom shopped that I would gravitate towards, always filling them in on the latest episode of “Ultra Man” or “Six Million Dollar Man” I had seen. They were all very patient and sweet.

The chemistry between Cody and Del feels completely natural and extremely appealing and even moving.

But without the late, great Brian Dennehy as Del and the terrific young actor Lucas Jaye as Cody, the film wouldn’t have been nearly as strong, and may not have worked at all.

Special mention must be made to Hong Chau (so good in Downsizing) as Kathy for her wonderful, understated performance, as well as the character actors who portray Del’s VFW pals (shout-out to Jerry Adler, who is excellent and heartbreaking as Rodger).

And Dennehy, to no one’s surprise, is aces here. He hits just the right notes throughout, and is given a down-to-earth, emotional monologue at film’s end.

Driveways would be a special film at any time, but given the fact that Dennehy is no longer with us – and that this is one of his final roles — it has even more resonance.

Driveways premieres On Demand and Digital HD on May 7th